Florence Kelley: the Quaker who fought for US workers’ rights 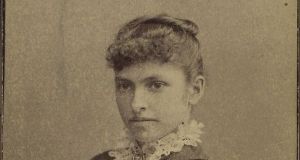 Portrait of Florence Kelley by AN Hardy

Florence Kelley’s pioneering work in improving working conditions for women and children in the industrial heartlands of the United States will be highlighted at this year’s Spirit of Mother Jones Festival in Cork.

Researcher Julianna Minihan’s interest in Kelley developed while attending Woodbrooke Quaker study centre in Birmingham during her preparations for Quaker ministry, when she began researching Quaker women and social justice.

“There were many Quaker women who exercised leadership in the 1800s, and I think the reason for this was because Quaker women were seen as spiritual equals since the mid-1600s, and there was this dissonance between their understanding of equality in their families and religion and in society.”

Kelley was the daughter of a member of the American House of Representatives who could trace his Irish ancestry back to 17th-century Derry. She grew up in Philadelphia. While studying in Zurich in the 1880s, she met with many socialists.

“She visited Manchester and saw working conditions there and she wrote to Friedrich Engels asking his permission to translate his German-language book The Condition of the Working Class in England,” said Ms Minihan. “He agreed, and several years later she met him in London and they became friends.”

“She published some articles in the 1880s, calling for the employment of children under 14 to be prohibited, and for schooling to be made compulsory and available for all children. She also wrote about the need for radical change in society, but her main concern was always child labour.”

Kelley was younger than Cork-born labour activist Mary Harris, aka Mother Jones, but was well aware of the older woman’s campaigns for children’s rights. She once remarked on “our own rebels . . . one is a white-haired old woman who spends most of her time going in and out of prison”.

Ms Minihan is looking forward to the opportunity to bring the story of Florence Kelley to a wider audience when she delivers a lecture, Slums, Factories and Child Labour: Florence Kelley, 1859-1932, at the Maldron Hotel in Cork on August 1st.

“It’s a great opportunity to tell people about Florence Kelley’s life and her dedication to her beliefs and desire to change society for the better,” she said.