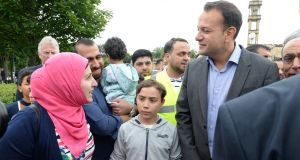 Taoiseach Leo Varadkar has said both judges and politicians need to respect the separation of powers between the Oireachtas and the judiciary.

“That really has to apply in both directions,” he said, responding to comments by President of the High Court Mr Justice Peter Kelly who strongly criticised the Government over plans to reform how judges are appointed.

Speaking at an event in Dublin last Friday evening, Mr Justice Kelly also said the Government was moving with “undue haste” on the matter.

On Sunday, Mr Varadkar said: “I am very conscious of the separation of powers that exist between the Oireachtas and the judiciary and am minded of the Chief Justice’s comments on that very matter only last week and I think that really has to apply in both directions.

“Both judges and politicians need to respect the separation of powers and ensure that there is a decent distance between the judiciary and the Oireachtas”, he added.

Last Wednesday Chief Justice Susan Denham gave a pointed reminder on the separation of powers between the branches of government in the controversy over former Attorney General Máire Whelan’s appointment to the Court of Appeal.

Ms Justice Denham noted that “the separation of powers in the State means that each great organ of State has its own specific powers.

“It is a system of checks and balances and inevitably the courts make decisions on the actions of other branches of government. Consequently, it is necessary that there be some distance between the branches.”

Regarding the Judicial Appointments Bill, the Taoiseach said that “the Government is fully behind it”. It would go to the Dáil this week “and we’d hope to have it enacted before the summer.

“That will bring about a major reform in the way judges are appointed in Ireland making it much more transparent and also ensuring all applications go through the new appointments board which isn’t and hasn’t always been the case in the past.”

He was speaking at the Islamic Cultural Centre of Ireland inDublin’s Clonskeagh where the end of Ramandan was being marked. He was “delighted to have the opportunity to wish a very happy Eid Mubarak to all the Muslim community in Ireland.”

Asked about a description of relations between himself and Fianna Fáil leader Micheál Martin as being “putrid”, he said: “I don’t believe so, to be honest. We had one meeting about two weeks ago and that meeting went quite well. We’ve had one phone call since so at least my individual interactions with him have been better than perhaps they’ve been described in the media.”

The Fine Gael led minority government relies on the support of Fianna Fáil to stay in power in the a “confidence and supply arrangement” whereby Fianna Fáil votes with the Government or abstains on votes in the Dáil.

Mr Varadkar last week asked Mr Martin to withdraw remarks he made about the suitability of Máire Whelan to be made a judge.

Responding to criticisms of him personally and on gender representation in his Government by Dublin Fine Gael TDs Maria Bailey and Kate O’Connell, Mr Varadkar said “Fine Gael is a democratic party. It’s an open party. I welcome debate and dissent and criticism and I’m certainly not going to be telling anyone off for criticising me.”

He pointed out that “there are 12 female TDs who support the Government; seven of those 12 are Ministers”. More generally in the Dáil “about 20 per cent of our TDs are women.” He would “like to see 30, or 40, or 50 percent women and that would give me or future taoisigh a bigger group of people to select from.”

Fine Gael had “more female TDs than any other party and we’re going to build on that by identifying selecting good candidates for the next local and European elections,” he added.

Boy not screened for hip problem at birth settles action for €120,000 16:21
Second-level teachers vote for industrial action over school safety and pay 16:10
Mother and two children found dead at south Dublin house 15:55
Mother of two sentenced to life in jail for murder of former husband 15:52
Slight increase in number of Covid-19 patients in intensive care units 15:32