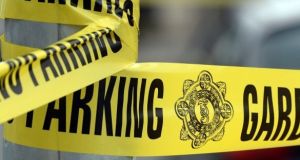 Five people arrested during an operation in Co Carlow on Tuesday are expected to appear before a sitting of Carlow District Court this morning, at 10.30am. File photograph: Cyril Byrne/The Irish Times

Five people arrested during an operation in Co Carlow on Tuesday are expected to appear before a sitting of Carlow District Court this morning.

A high-powered car bearing allegedly false registration plates was also seized by gardaí at Black Bog Road, Carlow as part of the operation.

The five were among a total of 17 people arrested as part of “Operation Thor” by the Garda National Drugs and Organised Crime Bureau, supported by the Emergency Response Unit and Security & Intelligence Section.

A man in his 30s was arrested during the operation and detained at Mayfield Garda Station under Section 2 of the Criminal Justice (Drug Trafficking) Act 1996. He has since been charged to appear before Cork City District Court at a later date.

A second, unrelated, search was carried out at a house on Saint Colmcille Road, Cork, which resulted in the seizure of an estimated €2,500 worth of cannabis resin; €3,000 of cannabis herb and €200 worth of ecstasy tablets. A man aged in his 30s was arrested and is currently detained at Gurranabraher Garda Station under Section 4 of the Criminal Justice Act, 1984.

In a further action a caravan worth approximately €18,000, which had been stolen in the UK, was seized in the Gurranabraher area of Cork. No arrests have been made and the investigation is ongoing.

A man in his 30s was also arrested on foot of a bench warrant in relation to a number of fraud incidents.

As part of the series of actions focussed on Cork, gardaí warned of a “change scam” where a suspect enters a shop and looks for change of a high value note. They then confuse the shop assistant with other requests which results in the shop handing over money it should not have.

Other incidents involve bank cards being used without the owners’ consent. This is usually done via contactless transaction. Gardaí said lost or stolen cards should be reported immediately to minimise any potential loss.

Gardaí also warned of buying match and concert tickets second hand via an online marketplace without verifying the identity of the vendor. Gardaí advised people to never send cash or use a money transfer company unless they were entirely satisfied.

Crime Prevention Officer, Sgt Tony Davis warned “lots of money will be spent in shops and online over Christmas and the January sales and we want to make sure nobody is defrauded out of money. We have a few simple tips; do some research online and only buy from trusted sources, shops or brands that you are familiar with.

“Make sure the website is secure by looking for the padlock symbol and the ‘S’ in HTTPS at the top of the screen. Don’t click on links or adverts from social media. Independently go to the website offering the deal” he said.

In all, of the 17 arrests: three people are still in custody, nine have been released and files are being prepared for the director of public prosecutions, and five are set to appear at court in Carlow.