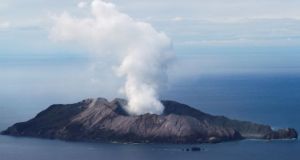 Deirdre Seoighe, from just outside Rathcoole, Co Dublin, was asked to come into Waikato Hospital after the eruption on the tourist island off the coast of North Island.

An Irish doctor who came off maternity leave to treat victims of New Zealand’s White Island volcano says her three-month-old son is being spoiled by staff coming in on their days off to look after him while she works.

Deirdre Seoighe, from just outside Rathcoole, Co Dublin, was asked to come into Waikato Hospital, where she is the region’s leading burns specialist, after the eruption on the tourist island off the coast of North Island.

The mother of four – aged nine, seven, four and three-month old Ruadhán – immediately began ringing around neighbours too see if anyone could look after them.

Her husband, an orthopedic surgeon, was also working on the victims.

“We don’t have any family here, but we have incredible neighbours,” she told the Irish Times.

“I couldn’t reach any to begin with, but then our Irish dancing teacher’s daughter Lucy - I knew the Irish crowd would sort me out - dropped everything and came to the house to look after the three older kids.

“I went to the hospital with the baby.”

Seoighe, who was a locum consultant in Galway, before moving to New York, then Auckland and onto Hamilton in 2017, said she “didn’t really think about what I was going to do with Ruadhán”.

“There was a gorgeous lady, a grandmother and one of our staff, who took it upon herself to look after him – she said go and do my job, she would take care of him.”

With eight volcano victims admitted to the hospital, she had to work through the night.

“When he needed to be fed, someone came into the theatre to tell me you need to feed the baby,” she said.

“I would go out and feed him, then hand him over to someone who would burp him and settle and I would go back and operate. I had complete faith in these people.

“I was coming out to find random people giving him a cuddle.”

Seoighe said Ruadhán was a great de-stressor for staff not used to seeing the horrific injuries caused by the volcano. The baby himself was “chilled out” throughout.

“There was just a bevvy of people lined up to hug him. He’s totally spoiled now. He doesn’t want to be put down for a second.”

Ruadhán has been in the hospital with her every day since. Nurses, who should be on their day off, come in to look after him.

Seoighe will continue working until just after Christmas, before travelling back to Ireland for a break.

“I’m looking forward to getting home,” she said.

1 McDonald expected to get highest number of votes but no taoiseach to be elected
2 Seán Ó Fearghaíl re-elected as Ceann Comhairle of the Dáil
3 Trump adviser Roger Stone sentenced to three years, four months in prison
4 A Russian cruiser with ‘cannibal rats’: What other ‘ghost ships’ could be out there?
5 Teenage girl (16) killed in Cork crash named as Kimberly O’Connor
Real news has value SUBSCRIBE