HMS Caroline is the only surviving ship of the 250 from both sides in the Battle of Jutland. The battle remains the biggest clash between battleships in history. Video: Ronan McGreevy 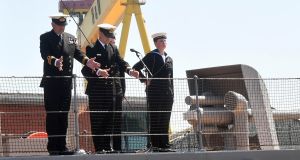 Wreaths are thrown overboard during the commemoration that took place in Belfast on HMS Caroline on the centenary of the Battle of Jutland: some 350 Irish sailors were lost in that terrible event which remains the biggest clash between battleships in history. Photograph: Colm Lenaghan/Pacemaker

Irish sailors killed in the first World War were remembered on Tuesday in conditions quite unlike those they experienced at sea in those tumultuous years. The quayside at Belfast docks was bathed in sunlight, and a flat calm prevailed for the commemoration, which coincided with the centenary of the Battle of Jutland.

Some 350 Irish sailors were lost – 123 from Co Cork alone – in that terrible event which remains the biggest clash between battleships in history.

The commemoration service took place in front of the refitted HMS Caroline, the only surviving ship of the 250 from both sides in the battle. The chief guest, Prince Michael of Kent, cut the ribbon. It will now be one of Belfast’s premier visitor attractions.

Marie McCarthy from Co Cork fought back tears as she recalled her grandfather Daniel Fitzgerald’s role in the battle.

Originally from Carrigtohill, Fitzgerald had few prospects after leaving school and joined the Royal Navy as a stoker. He was on board HMS Tiger, which managed to stay afloat despite being hit 18 times.

Fitzgerald witnessed the deaths of 24 of his comrades, as well as the destruction of the Queen Mary, which blew up in a colossal explosion with the loss of 1,200 sailors.

“The thought lingers with me to this day, and that my grandfather gave his all to the war,” she told guests.

“He returned home to be greeted by political turmoil in Ireland. I cherish the fact that he returned from the war alive. I honour him here today and I give voice to him as a war hero in presenting this tribute.”

The 120 Irish dead on board the HMS Indefatigable were recalled, including 48 from Cork, 17 from Dublin and 12 from Belfast.

Anna Norris from Co Waterford came to remember her granduncle Timothy Collins, from Cork, who died on the HMS Indefatigable, one of three giant battlecruisers sunk in the battle.

Two years earlier, the first Irish deaths of the war occurred when HMS Amphion struck a mine and sank on August 6th, 1914, just two days after war was declared. Fourteen Irish men drowned.

Lieut Brian Harvey of the Sea Cadet Corps recounted the sense of international outrage at a time when the Germans were suing for peace.

The service, at which the Government was represented by Minister of State at the Department of Defence Paul Kehoe, concluded with a blessing, a two-minute silence marked by eight bells and a bosun’s call.

Two wreaths, one a Tricolour, the other a poppy wreath, were thrown into the waters of Alexandra Quay.