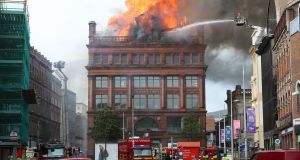 A firefighter trains a hose on a major blaze which has broken out at the Primark store in Belfast city centre. Photograph: Liam McBurney/PA Wire

A senior fire officer has described the fire that gutted a Primark store in Belfast as one of the biggest they have battled in a number of years.

Flames and thick black smoke engulfed the historic five-story building in the city centre. More than 100 firefighters battled for over six hours as the blaze ripped through the Bank Buildings, which has survived bombs and fires over the years.

Primark chief executive Paul Marchant said he was deeply shocked and saddened by the fire and moved to reassure staff that they will be “fully supported”.

The building, which has been in the heart of Belfast’s shopping district since 1787, had recently undergone a multimillion-pound refurbishment.

Primark customers and staff were taken from the building at around 11am on Tuesday after smoke could be seen billowing from the roof. Flames reaching at least 50ft could be seen right across Belfast’s skyline. Nobody was injured.

The clock at the top of the building was engulfed in flames before the fire spread from the roof to the floor below. Parts of the roof then collapsed.

Michael Graham, assistant chief fire and rescue officer, said they would continue to deal with the fire into the evening and potentially overnight. He said he did not know what caused it, nor whether there were fire alarms or sprinklers in place.

He expressed “concerns” over the structural integrity of the building, with part of it “prone to collapse” and said a 30m cordon had been established for that reason.

In a statement, Mr Marchant said: “We are deeply shocked and saddened by the fire today at our Bank Buildings store in Belfast city centre.

“The safety and wellbeing of our customers, colleagues and construction team is of course the most important consideration and we are truly relieved that all were evacuated safely.”

Hundreds of members of the public were removed from the area as part of the city went into lockdown with police closing roads and diverting traffic to allow firefighters to tackle the fire.

Loud bangs could be heard coming from the fire, while large pieces of debris were seen falling from the building.

Joan McCoy, president of the Royal Society of Ulster Architects (RSUA), said that these types of buildings give Belfast a “unique identity and character”.

“The Bank Building is a very important part of the city’s architectural heritage and is loved by many,” she added.

“This building has survived bombs and fire before. We can only hope that the damage is not too severe and that the building can be saved.” - PA