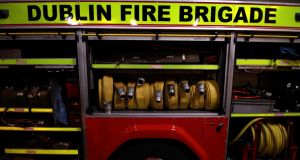 Fire brigade crews have been attacked while approaching Halloween bonfires in Dublin and an officer suffered an ear injury after a firework was thrown at him in the west of the city.

A Dublin Fire Brigade spokesman said there had been a number of attacks on its members in the last few days as they attended the scenes of illegal bonfires.

One officer suffered a perforated eardrum when a firework was thrown as the crew attempted to put out a bonfire in Blanchardstown on Sunday night. The spokesman said attacks on fire crews were not unusual.

He said on Monday night that units of the fire brigade were attending illegal bonfires at Dolphin’s Barn, Ballyfermot, Darndale, Finglas and Tallaght and attempts were made to prevent crews dousing the fires.

The spokesman added that people should only attend legal bonfires “and the only legal bonfires are tomorrow [Tuesday] night”, Halloween night and in areas designated by local authorities.

Fianna Fáil Dublin spokesman John Lahart called for tougher legislation to punish those who attack frontline workers such as members of the fire brigade.

“Unprovoked attacks on emergency workers including those in Dublin Fire Brigade, nurses and doctors in the cities hospitals are now sadly a regular occurrence,” he said. “Those working to protect the safety of ordinary citizens are not just a uniform, they are human. They have families and lives too and the public needs to act with respect.”

The ISPCA appealed to pet owners to keep their animals indoors as the noise and activity of Halloween can be very distressing for them.

It’s chief executive Dr Andrew Kelly said owners should have their pets micro-chipped “as permanent forms of identification so that they can be returned to the owner if they get lost or stolen”.

Outdoor pets should be brought indoors or put into a secure shed to shield them from loud bangs or flashes from fireworks.

The Northern Ireland Fire & Rescue Service also appealed to the public to put safety first “to ensure it’s a night for treats not tragedies”.

The service said that last year there was an increase in anti-social behaviour through deliberate fire setting. Its group commander Gerry Lennon said the service received 232 calls and attended 166 incidents, making it the busiest Halloween night since 2010.

Optometrists have also warned costume-party goers of the dangers of decorative or special-effect contact lenses at Halloween. The Association of Optometrists Ireland warned that the sale of such lenses was illegal and their use could cause damage to the cornea, ulceration, conjunctivitis or blurred vision.

Minister of State for Housing and Urban Development Damian English warned parents to ensure that Halloween costumes worn by children have the CE mark on the them, which shows they meet European safety standards.

He also said they should make sure children know how to “stop, drop and roll” if their clothing catches fire.

Minister for Justice Charlie Flanagan has warned of the dangers of fireworks. He said there were strict laws regulating fireworks and that licences were only issued to approved professional operators. Fines of up to €10,000 and five years’ imprisonment could be imposed for their illegal use, he warned.

“Unfortunately, when we hear of casualties caused by fireworks, the vast majority of incidents involve young people who have suffered eye injuries or severe burns; injuries which can scar for life,” he said.