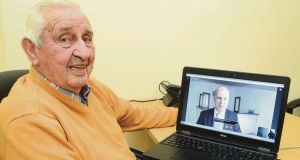 Noel O’Donoghue from Bandon talks to local Dáil Deputy Jim Daly using Skype. Technology aids constituents in one of the biggest constituencies in the State.

The weekly political clinic has been a staple of Irish politics for generations. Dáil deputies have criss-crossed their constituencies at weekends stopping in draughty halls, pubs and shops to hear about problems with planning permission, medical cards or funding for local organisations.

Busier schedules and changing lifestyles mean that politicians are under increasing pressure to meet the demands of their constituents. This can be particularly difficult if you have recently been appointed a minister of state but are still serving one of the largest constituencies in the State.

Fine Gael TD for Cork South West Jim Daly says his promotion to the junior ministerial ranks coincided with a huge surge in demand for people seeking to attend his clinics. His constituency is vast: Castletownbere is 100km from his office in Bandon and the roads are a long way shy of motorway standard.

To resolve it, he came up with the idea of hosting supplementary clinics from his Dublin office using Skype. Mr Daly, a Minister of State in the Department of Health, has already conducted some after-hours clinics online and is now planning to hold more such one-on-one meetings with constituents, even those with no access to technology.

“One of my staff members will go out with the laptop for Monday, Tuesday and Wednesday evenings when I’m in Dublin,” he said. “I’ve carried out over a couple dozen Skype clinics now and they’re very helpful for people.”

He said that the demand for clinics quadrupled when he became a Minister of State. “There was such huge demand that it was leading to delays, long queues and time pressure, so we were looking for an alternative way to facilitate people and alleviate the pressure on the traditional clinics,” he said.

“I began by making phone calls to people, but I think people prefer to speak to you face to face. So I said I would try Skype and see if it went well, and we’ve been very pleasantly surprised.”

It won’t all be Skype from here on. He will still do weekly clinics in Skibbereen, Clonakilty and Bandon but he hopes the online meetings will eliminate the delays and waiting times.