Fine Gael should be proud of its republican roots, says Hook 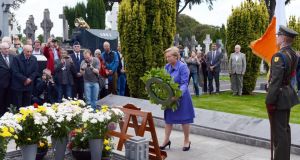 Minister for Justice and Equality Frances Fitzgerald , lays a wreath at the grave of Michael Collins, at the Collins Griffith Commemoration , at Glasnevin Cemetary. Photograph: Eric Luke / The Irish Times

Fine Gael should recognise its roots lie in the values and philosophy of 1916 and should be proud of its association with the Easter Rising, rugby pundit and broadcaster, George Hook told the annual Michael Collins Commemoration at Béal na Bláth in Co Cork.

Mr Hook said that 1916 was the starting point for the modern Irish State and members of Fine Gael should remember the involvement of Collins and many other founding members of the party in the Easter Rising.

Addressing a crowd of several hundred who braved near constant rain, Mr Hook said people should remember that not only was Collins himself in the GPO but there were also many other leading figures in Fine Gael including the parents of future Fine Gael leader, Garrett Fitzgerald.

“So too was Richard Mulcahy, who led one of the few military successes of 1916, WT Cosgrave, who was condemned by court martial to death, and a young man from Skibbereen and later a Fine Gael TD, Gearóid O’Sullivan who raised the tricolour over the GPO on that Easter Monday,” he said.

“I could recite here a roll call of the early leaders of the Fine Gael party who were 1916 men and proud of it ... the simple historical truth is that, like its major political rival, Fine Gael’s origins are deeply and irrevocably rooted in 1916.”

Mr Hook recalled how growing up in Cork in the 1940s, his late mother, a staunch Fine Gael supporter and devotee of Collins who took him to the polling station when she voted 1, 2, 3 for Fine Gael, was like many in the party, uncomfortable with the word ‘republican’.

“The use of the word ‘republican’ signified something else ... it has been hijacked by others - by the Irregulars of the Civil War who claimed to be fighting for a republic that was never going to exist - the largest political grouping on this island describes itself as a republican party.

“(But) the party of Collins has apostolic succession to 1916, it founded and nurtured the faltering young state and finally and proudly declared it a republic in 1948. Therefore I am proud to stand on this hallowed ground and declare I am Cork, I am Irish and that I am a Republican.”

Mr Hook pointed out that once established, Cumann na nGaedheal sought to be inclusive and over time opened its ranks to representatives of Southern Unionism such as Henry Dockrell and Major Bryan Cooper as well as Capt Willie Redmond and the remnant of the Irish Parliamentary Party.

Acknowledging a description of him by former Fianna Fail Senator, Jim Glennon “as the last man fighting the Civil War,” Mr Hook said his disagreement with Fianna Fáil was not over the Anglo-Irish Treaty of 1922 but over fiscal rectitude.

Thus while he shared the views of fellow Corkonian, Bill O’Herlihy on the brilliance of Irish out half Ronan O’Gara, he did not agree with Mr Herlihy’s suggestion at last year’s Béal na Bláth commemoration that Fine Gael should enter government with Fianna Fáil.

Fianna Fáil leaders such as De Valera, Lynch, Haughey and Ahern had all brought Ireland to the brink of financial implosion in their lust for power which was something Michael Collins would never have done as he was never afraid to take hard decisions and to tell the truth in simple unvarnished way

“A Collins regime would have left the bankers and the regulators of the 21st century in no doubt that their careers and liberty if not their lives were forfeit if they failed to live up to his standards - light touch regulation does not seem like something he would have espoused.”

Indeed Collins was scrupulous with regard to his own behaviour, deducting an amount from his expenses claim for personal mileage. “It was typical of the man - Ivor Callely obviously did not study Collins,” said Mr Hook to laughter from the crowd who warmly applauded his address.

Mr Hook was welcomed by the Chairman of the Béal na Bláth Commemoration Committte, Dermot Collins and congratulated on and thanked for his address on behalf of the Collins family by Helen Collins.

Among those in attendance were the Minister for Agriculture, Food and the Marine and Minister for Defence, Simon Coveney, Mayor of Co Cork, Cllr Alan Coleman, Deputy Lord Mayor of Cork City, Cllr Fergal Dennehy and Ireland South MEP, Deirdre Clune.