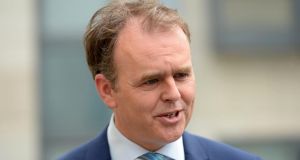 “We have to give responsibility to the EPA,” said Fine Gael Minister of State for Natural Resources Joe McHugh

“We have to give responsibility to the EPA,” he said. “No organisation is better equipped to examine the environmental impact of the process.”

He was responding to Sinn Féin spokesman Michael Colreavy, who called on the State to stop funding the agency to carry out research that he said would be used in future legal action against the State.

The next phase of the research involves going on to land in north Leitrim, west Cavan and southwest Fermanagh.

The Sligo-North Leitrim TD said the project should be stalled at least until the EPA appeared before an Oireachtas committee on December 2nd.

“Make no mistake about it, what we are doing is paying burglars and giving them the plans of our houses in order that they can come back and burgle us,” said Mr Colreavy.

He called for the suspension of the EPA’s research project into fracking because of concerns about its independence and integrity.

The British Geological Survey, UCD, Ulster University, Amec Foster Wheeler and Philip Lee Solicitors are also involved in the project along with the EPA.

Mr Colreavy criticised the independence of the project because of the participation of CDM Smith, who he said were co-ordinating the project and having an influential role in deciding who would do the various phases of the work.

Mr McHugh said he was aware of comment about CDM Smith having also provided expert advice to oil companies involved in the development of unconventional gas resources. “However, CDM Smith has also provided advice to State bodies and regulatory agencies across its area of expertise,” he said.

But Mr Colreavy said that many TDs and Ministers had told him that “fracking will never be allowed to happen on this small island. It is time there was political accountability and that political responsibility was taken.”

He said the initial mistake was to issue an invitation to submit expressions of interest, but it was now time to say fracking would not be allowed in Ireland.

“It is time we stopped funding the EPA to gather information that energy companies will be able to use in a future legal action against this country, in particular when the Transatlantic Trade and Investment Partnership and investor-state dispute settlement are introduced.”

But the Minister insisted that no reputational damage had been done to the EPA. It had been very consistent and focused in ensuring the two pillars of the research – environment and human health – were addressed.