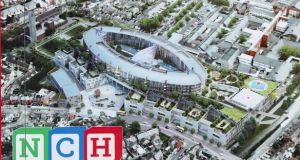 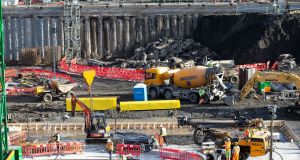 The construction site of the national children’s hospital in Dublin. A PWC report has criticised the oversight of the project. Photograph: Tom Honan/ The Irish Times

The cost of the national children’s hospital could rise above €1.7 billion, a new report into the cost of the project has warned.

A report by consultants PwC into the significant over-runs at the hospital has found that there are still risks associated with the project. The cost could rise by almost €100 million if construction inflation increases to 10 per cent this year. Furthermore, elements of the design still have not been finalised.

There is also little scope for reducing the cost of the project, the report finds.

“The ability for cost reductions in these committed areas is very limited due to the restrictions in the respective contracts. Whilst cost reduction may be technically possible, exercises of this nature come with considerable risk of further claims from and disputes with the contractors.”

The report also says finding a new builder for the national children’s hospital at this stage would have cost the taxpayer more than continuing with the current builder.

It concluded this was “an unrealistic fall-back option”, and would have increased costs further and - in all likelihood - resulted in no hospital being built.

Furthermore, the original estimate for the project was never adequate.

Responding to the publication of the report Taoiseach Leo Varadkar said the findings make for “grim reading”.

“The report finds the escalating costs of the new national children’s hospital related largely to an underestimation of the cost of building it in the first place, as well as the cost of delays, higher building standards and the knock-on effect of VAT.

“It does not recommend retendering as a feasible option and suggests there is little scope for savings.

“Our priority now must be to finish the job on time to meet the 2023 opening date, contain further cost increases and learn from the mistakes made in advance of other major projects like Metro and the National Broadband Plan,” Mr Varadkar said.

Lack of the oversight

PwC found that from the outset the project “was driven by an imperative for timely completion, within a cost envelope that was never adequate to deliver the envisaged outcome and from a design that was continually evolving.”

The PwC consultants also singled out the role of the quantity surveyors and criticised the lack of the oversight of the project.

The reporting of cost information between the three main boards overseeing the project was “sporadic” and “inconsistent”.

The report said the hospital was a vital project and “recognised that a programme of work of this nature can never be fully de-risked.”

“Many difficult issues have been overcome which have brought us beyond the false starts of the past.

“Nevertheless, it is clear from the findings and recommendations that there were significant weaknesses which led to escalation of cost which only became known at far too late a point in the process.”

The Government, it is understood, has agreed to come back with an implementation plan for the project within a month.

Equipping the building and providing IT pushes this bill up to €1.73 billion; this does not include the cost of family accommodation, a research centre, excess construction inflation and any other changes to clinical standards.

The report looked at decision-making, controls, processes and oversight of the planning and delivery of the hospital project, and crucially will examine how the contract was managed, particularly in relation to cost increases.

It also examined the sequence of events, and the appointment of BAM - the main contractor - as well as the terms of that contract.

The review aims to establish the root causes and decisions which have led to cost increases.

However, the review ran into controversy almost immediately when it emerged that it would stop short of naming individuals or suggesting blame to any individual involved.

The backlash over the limited terms of reference prompted Mr Varadkar to revise the report to enable PwC find individuals accountable, or identify individuals who made particular mistakes - if that was what was found.

The controversy has already claimed scalps on the children’s hospital board, most notable when the chairperson - Tom Costello - resigned in February.

He was succeeded by Fred Barry, the former chief executive of the National Roads Authority. The project director, engineer John Pollock, stepped down in March. Much of the debate earlier this year focused on exactly when Minister for Health Simon Harris became aware of the cost overruns, and how and when he passed that information onto cabinet colleagues.

Since then, the Government has been forced to find tens of millions in savings, redirecting funds from Irish language schemes, the carbon fund, rural funds, waste management initiatives, flood risk management, roads and higher education projects in order to cover cost overruns at the hospital project.