Father of Washington Rose who died cements links with Tralee

The Henggelers, whose daughter was in 2011 event, buy the Fels Point Hotel in Kerry 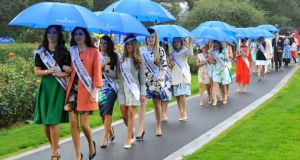 Her parents, Dick and Eibhlin Henggeler, brought her body back to Ireland to be laid to rest in her mother’s hometown of Killarney.

Dorothy, known as Dott, began to get dizzy spells in November 2013. Later she was diagnosed with a brain tumour.

The couple had previously experienced tragedy. Their two-year-old daughter Treasa died of meningitis in 1984 while the family were on holidays in Killarney. Dorothy was born two years later.

“Dorothy’s name means gift of God,” her mother said. “Dorothy was just passionate about life. She was passionate about Ireland and America. Even on her hospital bed, she was asking every doctor and nurse, ‘Have you ever been to Ireland?’”

At the time of the 2011 Rose of Tralee International Festival, Dorothy worked as a communications co-ordinator for T Rowe Price, having graduated from Virginia Tech with a degree in communication. She also spent time working for Tourism Ireland in New York.

The Henggelers now have a more permanent reminder of their daughter’s connection to Tralee. On Friday, the town unveiled a new Rose Walk with a stone memorial to Dorothy.

The couple have also made an intervention which may well secure the long-term future of the festival. In June, they bought the Fels Point Hotel in Tralee, which is adjacent to the Dome, for an undisclosed sum. The 165-bedroom hotel was sold through Nama and guided at €4 million.

Mrs Henggeler said she and her husband had resolved to give back to the festival even before Dorothy got sick because of her experiences at the festival. “College doesn’t give you this kind of life experience,” she said.

Mr Henggeler said buying Fels Point was both sentimental, given their daughter’s connection with the Rose of Tralee, and also a straightforward business decision.

Mr Henggeler sold his company Henggeler Computer Consultants in December 2011 to computer security giants Raytheon. The price was undisclosed, but it was enough to reinvest substantial sums elsewhere.

“For us, from a business point of view, it was a reasonable price. It is getting into tourism in Kerry which can’t go bad, and the business climate is improving in Ireland,” he said.

The Henggelers intend to change the name of Fels Point to The Rose Hotel. They have started a process of refurbishment. They also plan to build a permanent dome to replace the temporary structure which is erected every year for the festival.

The Dome, once completed, will be a conference centre and concert venue along with being a permanent home for the Rose of Tralee. It is hoped to have it ready for 2017.

When the new Roses arrived on Friday, Mrs Henggeler believed she had made the right decision.

“We stood at the steps of the Fels Point and welcomed 32 amazing ambassadors for Tralee. I couldn’t be more proud because I know Dorothy is directing my head and my heart. Her own spirit was so full with passion. I stood there and I knew this was where I needed to be in this part of my life.”