‘Fatal’ amount of alcohol can be bought for €10, says survey 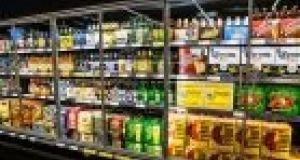 The Irish consumer can spend as little as 50 cent for beer and cider while the price of a single standard gin drink is 60 cent, according to a pricing survey by Alcohol Action Ireland.

Alcohol in Ireland now costs so little that a woman can consume enough to damage her health by spending just €5.50 a week while a “fatal” amount can be bought for less than €10, a new pricing survey suggests.

In its latest alcohol market review and price survey, Alcohol Action Ireland (AAI) has said the price of alcohol in the Republic demonstrates “the remarkable affordability of alcohol to everyday shoppers”.

Its report says there is an urgent necessity to implement the Public Health (Alcohol) Bill, including minimum unit pricing, to “ensure the low cost of the strongest, cheapest alcohol will be tackled”.

Published on Thursday, the survey suggests alcohol is cheap not only in major retail operators but across all retail outlets.

The survey, conducted in four locations, two urban and two regional, suggests cider remains the cheapest alcohol product available with beer coming in in second place just ahead of wine, gin and vodka.

The methodology deployed sought to establish the unit cost per standard drink which is put at 10g of pure alcohol. So a 4.3 per cent beer in a 500ml volume container contains 1.7 standard drinks, while gin that is 37.5 per cent in a 700ml bottle contains 21 standard drinks.

“At this level of affordability, for a tenner you can buy enough drink to cause a fatal alcohol overdose,” Dr Bobby Smyth, consultant child and adolescent psychiatrist and AAI board member.

The Irish consumer can spend as little as 50 cent for beer and cider while the price of a single standard gin drink was put at 60 cent, slightly less than the cost of vodka. A standard drink of wine was said to be 56 cent while a small whiskey was priced at just under 74 cent.

The survey highlights what it said was a “sophisticated retailing model” deployed nationwide by the alcohol industry and their retail partners that maximises the yields from alcohol sales.

In many cases, the authors claim, it is as cheap to buy gin or whiskey in a convenience store as a large supermarket; strong, cheap beer is often as affordable in small shops as it is in large supermarkets and cider is universally cheap through all levels of alcohol retailing.

“Given the ubiquity of cheap alcohol in all stores, the loss of the original structural separation measures proposed within the Public Health (Alcohol) Bill but lobbied against by retailers and diluted by Seanad Éireann in 2017, remains a significant lost opportunity to curb alcohol marketing by intrusive visibility in-store,” said Eunan McKinney, head of communications at the AAI.

The price of drinking alcohol in a pub has increased by well over 300 per cent since the late 1990s but the cost of alcohol consumed at home has fallen dramatically and, in real terms, is now more than 50 per cent cheaper than it was in the summer of 1998.

We have the big retail chains – Tesco, Dunnes Stores, Centra, Spar and Costcutter – to thank or to blame. They control the vast bulk of alcohol sales in the Republic and their aggressive use of it as a loss leader has seen below cost selling become common place.

Added to the mix has been the popularity of the German discounters Aldi and Lidl where a bottle of wine can frequently be bought for less than €4.

As concern over the health implications of problem drinking has mounted, legislation aimed at introducing minimum unit pricing for alcohol – a “floor price” below which a unit of alcohol cannot be sold – was put forward and is slowly becoming a reality in Ireland although a row over labelling plans to include health warnings linking alcohol to cancer have delayed the process.

The idea is to target cheap and strong alcohol attractive to problem drinkers and affordable to young people at pocket-money prices. Drinks such as own-brand spirits, lager and cider and very cheap wine are hit by such measures.

To see the impact minimum pricing has one need look no further than Scotland where similar legislation was rolled out earlier this year.

It has had a dramatic impact on pricing in some categories with cider hit hardest. Prior to the law change, a bottle of cider with around 15 units of alcohol – the equivalent of a half bottle of spirits – sold for less than £3. Since the law was changed the price has jumped to £7.50.

Another category that changed was the below-cost supermarket own-brand vodkas which would have cost around £10.50 and they were going up to around £13.