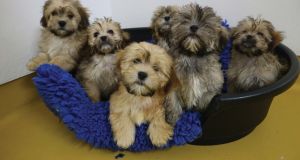 Some of the dogs rescued by the ISPCA last week. Photograph: ISPCA

More than 100 puppies and dogs were rescued by the ISPCA last week.

Eighty-six dogs, including 23 puppies, were removed from an illegal dog breeder in Co Roscommon last Friday. The dogs were removed by ISPCA inspectors after they discovered the animals were being kept in very poor conditions with only one person to care for them all.

Nineteen of the dogs were suffering from a variety of health issues, including eye conditions and ear infections, and are now receiving veterinary treatment.

A further 17 puppies were removed from a house on Thursday where the owner had allowed his dogs to breed “without consideration for the consequences”, the ISPCA said. All of the dogs will need to be vaccinated, neutered and microchipped before being rehomed.

The dogs, including Shih Tzus, cocker spaniels, Jack Russell terriers, pugs, French bulldogs and other various mixed breeds, are currently being cared for at the ISPCA’s animal centres in counties Longford and Donegal and will not be available for rehoming for several weeks.

Dog breeders are required to be registered and licensed under the Dog Breeding Establishments Act, 2010, if they have six or more female dogs over the age of six months and capable of breeding.

The ISPCA is asking the public to report any suspicions about unlicensed dog breeders to its animal cruelty helpline at 1890-515515 or to their local authority.

Senior ISPCA inspector Kevin McGinley said that “with so many dogs in our care we are appealing to the public to support us financially with this challenge and by offering responsible homes for the pups and dogs”.