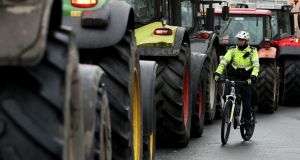 Many of the tractors in the farmers’ protest in Dublin on Wednesday were said to be those of farming contractors who provide machinery. Photograph: Brian Lawless/PA Wire

Musing on the unusual nature of beef demonstrations in Dublin on Wednesday, one protester characterised them as “organised chaos”.

It was a reference to the paradox of a highly organised movement that claims no organisational structure, just “individual” protestors, a deliberate tactic to avoid legal action against a group.

“All individuals; all fighting for our cause,” said one farmer at the early-morning barricade on Kildare Street, where Minister for Agriculture Michael Creed arrived to listen to their concerns.

Some farmers contradicted each other. “Mr Creed, he’s not representing us,” said one at the back, referring to one participant at the front who was spelling out what he thought the main issues were.

The Irish Farmers’ Association (IFA), Beef Plan Movement and other organisations have no role in the protests that strangled traffic in the city. Indeed, they were largely dismissed as ineffective and toothless by protestors.

But the result is a lack of clarity on exactly who the protestors are. There is widespread acceptance that the leadership is made up of those who were less content to see an end to the processing plant blockades in September. This week’s action followed four meetings in the midlands in recent weeks.

On Wednesday, two distinct groups – one calling itself the Independent Farmers of Ireland and the other a loose band of farmers and contractors – engaged briefly with Mr Creed.

Critics of this formulation from within political, official and farming circles have said it undermines meaningful negotiations of the type that broke down last month when the beef taskforce was suspended. Farming sources not involved in the protests have also warned against tactics that could alienate public sympathy.

“Every individual out there represents themselves; you can’t negotiate with anybody,” said one official.

Many of the tractors on Wednesday morning were said to be those of farming contractors who provide machinery. They are especially motivated by carbon tax and the threat of the rising cost of agricultural diesel, which many see as a further penalty against rural Ireland.

While there are tensions between various farmers, there is a reluctance to entertain a right-wing political fringe which has attached itself to the recent protests.

A number of well-known online figures and organisations such as the Irish Freedom Party and the National Party attended the demonstration, some handing out leaflets.

“They see an opportunity to get on a platform which they hope will probably help to push their agenda,” said an official in one farming organisation.

Mr Geoghegan said gardaí had advised them not to wear high-vis jackets, apparently because of their similarity to the Yellow Vest movement.

“We don’t want them here,” he said of the various political and online personalities on the right. “Farmers don’t want anything to do with them; they just cause hassle.”