Would you like to be the first Traveller president? ‘I wouldn’t say no’

Dr Sindy Joyce speaks about appointment to Council of State 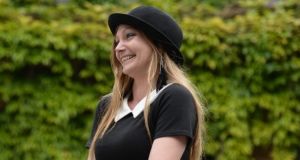 Dr Sindy Joyce has been appointed to the Council of State. File photograph: Dara Mac Dónaill

A member of the Traveller community appointed by President Michael D Higgins as one of his advisers sees her new role as a rebuke to attacks on her community during elections for the Áras last year.

Dr Sindy Joyce, who recently became the first Traveller in Ireland to graduate with a PhD, has joined former taoisigh and ex-presidents as one of seven new appointments to the Council of State.

The President can appoint up to seven members who join current and former taoisigh, former presidents Mary Robinson and Mary McAleese, the chief justice Mr Justice Frank Clarke and the Attorney-General Séamus Woulfe SC in advising him on matters such as whether to refer a Bill to the Supreme Court.

They have the authority to provide for the temporary exercise of the duties of the president, in the event that these cannot be exercised by either the president or the presidential commission.

Ms Joyce said she saw her appointment in the context of controversial remarks made by presidential candidate Peter Casey last year that Travellers were “basically people camping in someone else’s land” and should not be recognised as an ethnic minority.

“Yes, in a way,” she said, asked if Mr Higgins was reacting to the controversy.

“We can see by the presidential campaign last year that Michael D Higgins and Peter Casey, who was running as well, we can see that they are on the opposite scales of human rights.”

“It is overwhelming to be nominated by the President and to sit on the council and learn from him and the council,” she added.

“It means the world. I’ve been getting so much support from my people.

“It opens the doors for my community to see themselves reflected in Irish society but also to see a way forward. Being the first at anything is a big responsibility but I’m willing to take it on if it opens to doors for others in Irish society.”

Asked if she would like to be Ireland’s first Traveller president, she told RTÉ Radio: “I wouldn’t say no.”

The new members announced on Thursday also include disability advocate Sinéad Burke. Educator and advocate Ms Burke consults within the fashion, architecture and design industries to ensure that spaces and products are accessible to all. According to British Vogue, she was one of the 25 most influential women in 2018.

Joining them will be Sean Ó Cuirreáin, a former journalist, broadcaster and deputy head of RTÉ Raidió na Gaeltachta. He was appointed as language commissioner in 2004 and was re-appointed to the position in 2010.

He resigned in 2013 citing the widespread failure of Government departments and public bodies to ensure the right of citizens to use Irish when interacting with State agencies. He was dissatisfied with the promotion of language rights in the Irish-language community and in the Gaeltacht.

The other three appointees include Dr Mary Murphy, senior lecturer on the BA politics and active citizenship in Maynooth University; Rev Dr Johnston McMaster, a Methodist minister and adjunct assistant professor at the Irish School of Ecumenics at Trinity College Dublin; and Maurice Malone, chief executive of the Birmingham Irish Association.

1 Miriam Lord: Minister for Agriculture tries to get himself out of the manure
2 Coronavirus: One more death and 24 new cases reported in the Republic
3 Taoiseach rules out united Ireland referendum as ‘divisive’
4 Martin criticises ‘over-focus’ on Border poll ahead of Foster meeting
5 Barry Cowen tells Dáil he is profoundly sorry for ‘stupid’ drink-driving offence
Real news has value SUBSCRIBE