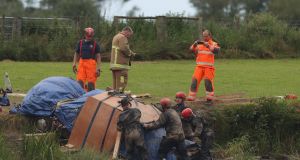 The sister-in-law of a man who went missing close to 29 years ago and whose body was found last month has spoken of the family’s relief that he could have a Christian burial.

On Monday a private family funeral was held in Magherafelt, Co Derry, for James Patterson, whose body was recovered from the River Bann last month.

The day after his interment, the Police Service of Northern Ireland officially confirmed the man was Mr Patterson, from Motalee near Desertmartin in Co Derry, who went missing on October 6th, 1991.

His sister-in-law, Mildred Patterson, said on Wednesday it was a great relief for the family that they were “no longer wondering” what happened to Mr Patterson, who was 54 when he went missing.

He disappeared during the Troubles, but police said his death was not suspicious. Ms Patterson added the family was equally convinced there was nothing untoward about his death.

Mr Patterson had worked with the local council at the time he went missing, doing labouring work such as cutting hedges and tidying the roads.

“He was a quiet man,” she explained. “He was not involved in many activities; he just stood around home mostly.”

Ms Patterson’s husband Willie died seven years ago not knowing what had happened to his brother.

Mr Patterson had six siblings but all now are dead apart from a sister, Iris, who lives in Scotland. “At least now we know where he is at,” said Ms Patterson.

She remembered that the night before his death, a Saturday, he visited a friend in Mid-Ulster Hospital in Magherafelt.

“He went to church that Sunday morning and then he went away missing in the evening time,” she recalled.

The family had always wondered what happened, but the mystery remained unresolved until last month when his Ford Orion was discovered by the local Community Search and Rescue team in the River Bann, near Bellaghy, Co Derry.

Searches had also been carried out in 1991 but nothing was found, remembered Ms Patterson.

He was a single man, who had lived with his mother. “She passed away a few months before he went away,” she said.

He was not a particularly good driver, she recalled. “He could drive a car all right, but he did not go too far, just around the wee roads in the south Derry area.”

Local Ulster Unionist Party councillor Derek McKinney said he had known Mr Patterson and was a teenager when he went missing.

He was glad the family now had “closure”. The community, he added, would rally around the family and offer support and comfort.

“When you are waiting 29 years for an answer, you have had your grief long before now. What the community can do is pray for the family,” said Mr McKinney.

His funeral notice said donations in his memory, if desired, should be made to the Community Rescue Services Central.

Coronavirus: Five deaths and 248 more cases reported 17:35
More than 100 people gather in Co Donegal for anti-Covid-19 restrictions rally 16:42
Cork hunger strike exhibition ‘to educate youth about Irish freedom’ 16:16
Man with electric scooter who died in Meath was due to get married in the coming weeks 14:40
Two men arrested following Garda chase in Balbriggan 13:47