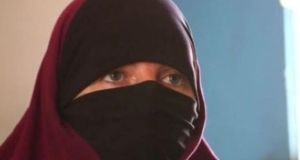 The family of Lisa Smith, the Co Louth woman who left Ireland to live in the Islamic State caliphate, says she is eager to return to the State to clear her name, according to a TD.

The family of Lisa Smith, the Co Louth woman who left Ireland to live in the Islamic State caliphate, says she is eager to return home to clear her name, according to a TD.

Independent Louth deputy Peter Fitzpatrick said the Dundalk woman’s family believes she is innocent of all charges and that they are prepared to care for her daughter if she is detained on her return to Ireland.

Ms Smith (38), a former Irish Air Corps member, left Ireland more than five years ago for Syria and married one of the terrorist group’s fighters, who has since been killed.

She and her two-year-old daughter fled the Islamic State stronghold of Baghouz earlier this year before being taken to a refugee camp. They recently spent time in a displacement camp in northeast Syria, along with other family members of Islamic State fighters, but fled when it was bombed by Turkish warplanes in October. They were later picked up by a Turkish-backed militia.

Ms Smith has since been interrogated by Turkish security services and is expected to be deported in the near future. A team from the Department of Foreign Affairs, supported by members of the Army Ranger Wing, are in Turkey liaising with the local authorities on the matter.

Speaking on LMFM, Mr Fitzpatrick said Ms Smith had remarried because a woman cannot live on her own “in that country”.

Ms Smith has given several interviews to various media outlets admitting membership or association with Islamic State. Government officials say this is the firmest evidence that she committed an offence which could be successfully prosecuted in an Irish court.

Under Government plans the repatriation of Ms Smith will not be publicly confirmed until she is already back in Ireland. Once back she will undergo a security assessment, and will be asked to sit for a voluntary interview with gardaí from the Special Detective Unit. She is also likely to be subject to Garda surveillance, both overt and covert, to monitor her movements and for her own protection.

Speaking in the Dáil on Tuesday, Minister for Foreign Affairs Simon Coveney said his primary concern was for Ms Smith’s daughter, a “two-year-old little girl who in my view as an Irish citizen we have an obligation to protect. That is what is driving all of this.”