Extra rail carriages worth €150m to be purchased, Ross says 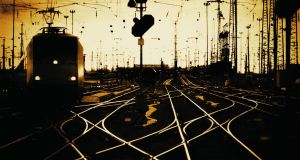 The new carriages will enter service by 2021, for the Kildare, Maynooth and Northern commuter lines. Photograph: George Doyle/Getty

Extra carriages for commuter rail services for the greater Dublin area are to be purchased in an €150 million move announced on Wednesday by Minister for Transport Shane Ross.

Mr Ross received Cabinet approval to purchase the carriages, which will enter service by 2021, for the Kildare, Maynooth and Northern commuter lines.

He also outlined a new road scheme for Limerick, including a bypass of Adare village, which is due to host the 2026 Ryder Cup.

The Limerick roads project will cost a total of €447 million. It comprises 15.5km of “national primary road to motorway standard (M21) from the existing N21 junction with the existing M20 at Attyflin and Rathkeale, providing a bypass of Adare”; a 15.5km connection between Foynes Port and the proposed M21 motorway at Rathkeale; and a link to the existing N69 at Askeaton.

“Both of these projects are hugely significant and will deliver real benefits to rail commuters in the greater Dublin area as well as remove road bottlenecks and improve infrastructure in the midwest region,” Mr Ross said.

The Government said the purchase of the additional 41 rail carriages will increase capacity on the relevant lines by 34 per cent during peak commuter hours.

“While it will take two years before any of these carriages enter service, customers will be reassured by the very fact that they are on the way.”

Passenger numbers on the greater Dublin area commuter services have increased by one-fifth between 2015 and 2018.

The announcement, however, was criticised by the Opposition, with Fianna Fáil transport spokesman Marc MacSharry claiming Mr Ross was reannouncing “old plans”.

This was denied by Mr Ross, who insisted the investment was new and had not been previously flagged.

Kevin Humphreys, a Dublin Bay South Senator who is Labour’s transport spokesman, welcomed the announcement but said commuters would not see the benefit for years.

“Commuters will be thankful that the Minister has finally greenlighted the long-delayed purchase of these much-needed 41 rail carriages, which have been in the pipeline for years now,” Mr Humphreys said.

“I am really concerned that this delay has also come at an extra cost to the taxpayer. Earlier this year, the mooted cost of these 41 carriages was around €100 million. Today, that price tag is €150 million. That’s an unnecessary and huge increase at a time when that extra spend could have been used to further invest in public transport.”

Mr MacSharry, a Sligo TD, said: “The urgent expansion of the rail fleet is needed. The greater Dublin area and intercity services are overcrowded and approaching dangerous levels. Safety rather than comfort is now a real concern.

“The Minister must immediately outline contingency plans he intends to put in place to accommodate commuters while these new carriages are on order. He cannot tell people to wait two years while demand outstrips capacity at an increasing rate.”

Also at the weekly Cabinet meeting, Minister for Housing Eoghan Murphy got support from his colleagues to extend a provision which allows planning applications for large-scale housing developments of 100 units or more to be made directly to An Bord Pleanála.

The measure, which also applies to large-scale student accommodation projects, was first introduced in 2017 and, under the Minister’s plan, would be extended for a further two years.

Mr Murphy based his decision on foot of a review conducted by the Strategic Housing Development Review Group, and the analysis that there remains an undersupply of housing, particularly in urban areas.