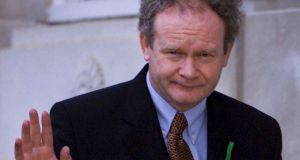 In what may have been an attempt to initiate discussions with the British government in the last years of the Troubles, Martin McGuinness [late deputy first minister in Northern Ireland and then a leading IRA figure] sent personal letters to leading Conservative politicians in 1992 seeking a meeting with the Sinn Féin leadership. The previously unknown overtures are disclosed in declassified files from 1992 released today in Belfast under the 20/30 year rule.

On June 15th, 1992 McGuinness wrote to Peter Brooke, the recently replaced Northern Ireland secretary, from his home in Derry’s Bogside, suggesting they should meet. Following his departure from Northern Ireland, Brooke had admitted he would like to have met the Sinn Féin president, Gerry Adams as a matter of history and as a “human reaction” to his “significant role in events”. Later, in 1994, Brooke would describe Adams as “a brave and courageous man”.

McGuinness wrote: “Dear Mr Brooke, I found it interesting that in a BBC interview shortly after you left office as Secretary of State you expressed your regret at never having met the Sinn Féin president, Gerry Adams during your time in Stormont.” He said said he appreciated that, even though Brooke had left the NIO, “difficulties may still exist to prevent you undertaking such an initiative. Accepting this, I would still like to explore the possibility that a meeting between yourself and other members of the Conservative Party with representatives of Sinn Féin could take place at some time in the future”.

McGuinness said he was also writing to extend the invitation to the former Conservative prime minister, Sir Edward Heath. By way of encouragement, he referred to recent discussions “between the Presbyterian moderator and bishop Edward Daly [bishop of Derry] and Sinn Féin”, adding: “There is general acceptance that this has been a positive development and I feel the courage shown by these clergymen is worthy of commendation”. He expressed the hope Brooke would give “serious consideration” to his proposal.

The files show that Brooke forwarded McGuinness’s letter to the NIO for its advice in responding. In a memo to the new Northern secretary, Sir Patrick Mayhew, dated June 22nd, 1992, John Chilcot, head of the NIO, stated that the Secretary of State had endorsed his [Chilcot’s] advice that Brooke should not “say anything in reply to Mr McGuinness other than what will be, no doubt, a polite refusal”. Chilcot added that Mayhew had “raised the remarks made by his predecessor [Peter Brooke] about the British presence” in Ireland. This was a reference to Brooke’s speech in London on November 9th, 1990, “the terms of which [Chilcot noted] were cleared by the former PM [Margaret Thatcher] in which he said: ‘The British government has no selfish, strategic or economic interest in Northern Ireland: our role is to help, enable and encourage’.”

McGuinness’s letter in similar terms to Heath evoked a belated response from the ex-prime minister’s private secretary, Nick Edgar who rang Jonathan Rodell, Brooke’s private secretary, on August 21st, 1992. According to Rodell’s memo, he “rang . . . to ask what I could tell him about a certain Martin McGuinness. I explained that McGuinness was a leading figure in Sinn Féin and a close associate of Gerry Adams; that it was widely believed that he was also a central figure in PIRA; that he had previously been seen as one of the hard men of the Republican movement, but that recent reports had suggested that his position was softening slightly and that he was interested in recruiting either Mr Brooke or Sir Edward to act as some kind of mediator.’

The private secretary revealed that Sir Edward had recently received a letter from Martin McGuinness to which he had “sent only an acknowledgement”. However, the former prime minister’s interest had been awakened by a report that the DUP leader, Ian Paisley was “claiming that the idea [of talks with Sinn Féin] had the support of the government”. Sir Edward, his spokesman said, “was wondering how to respond”.

In response, Rodell told Edgar bluntly that the Secretary of State [Mayhew] would be happy to talk to Heath about the matter : “I made it clear that McGuinness was not someone who either Ministers or officials would be prepared to speak to and that the question of contact with Sinn Féin was a sensitive one . . .’