Northern Ireland archives: Fenn said notion of giving equality of esteem to unionism and nationalism had yet to get off the ground 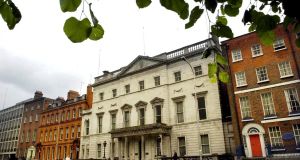 Sir Nicholas Fenn claimed that in the Irish Department of Foreign Affairs (DFA), the “Protestant identity was accepted as ‘an obligatory mark of pluralism’. Photograph: Bryan O’Brien

The British ambassador to Ireland in 1991, Sir Nicholas Fenn claimed that in the Irish Department of Foreign Affairs, the “Protestant identity was accepted as ‘an obligatory mark of pluralism’, but the notion of giving equality of esteem to Unionism and Nationalism has yet to get off the ground.”

In a memo dated August 12th, 1991 addressed to the foreign office in London, he recalled an Irish Department of Foreign Affairs official informing him (in Belfast) that “all Unionists are bigots”.