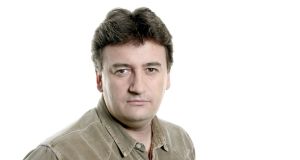 Fergal Keane has been with the BBC for more than 30 years and has reported from some ofthe worst conflict zones in the world most notably during the Rwanda genocide. Photograph: Rolf Marriott/BBC/PA Wire

BBC News Africa editor Fergal Keane is to step down from his role as he is suffering from post-traumatic stress disorder (PTSD).

Mr Keane (59), who has been with the BBC for more than 30 years, has reported from some of the worst conflict zones in the world most notably during the Rwanda genocide.

His reporting from there won him both the Royal Television Society journalist of the year award and the Sony Radio Reporter award.

In a statement sent to BBC staff by head of news gathering Jonathan Monro, he confirmed that Mr Keane, who was brought up in Dublin and Cork, has decided to “step back from role” as BBC News Africa editor.

The reasons given are personal. Mr Munro went on to the state: “For several years, Fergal has been dealing privately with the effects of post-traumatic stress disorder, stemming from several decades of work in conflict zones around the world.

“He has been supported throughout this time by friends and colleagues in news as well as well receiving professional medical advice.

“However, he now feels he needs to change his role in order to assist his recovery. It’s both brave and welcome that he is ready to be open about PTSD.”

In an article in The Guardian responding to suggestions that the media had not properly covered the Rwandan genocide, Mr Keane responded: “ I arrived in late May 1994. It was still a traumatising place. A week before, the BBC’s Geoff Spink and Andy Kershaw were caught in an attack and hunted through the bush by members of the Interahamwe.

“They were lucky to escape. It simply is not possible to convey the atmosphere of terror for those of us who tried to cover the genocide. For some of us, it has left an enduring mark, a sense that we failed, not so much as journalists, but as human beings, because we saw things we were powerless to stop.”

Mr Munro said Keane will remain with the corporation on different platforms across news and current affairs.

Mr Keane also comments regularly on Irish history. He made a five part series for the BBC on the subject in 2011. His book Wounds about his family history in the Irish revolution wont the Christopher Ewart-Biggs memorial prize in 2017.

In recent weeks he waded into the debate over the now postponed Royal Irish Constabulary/Dublin Metropolitan Police.

Pointing that his great-grandfather Patrick Hassett had been an RIC man in Co Clare, Mr Keane wrote in The Irish Times: “One of the great liberations of the post-Troubles era was to shift the consideration of Irish history away from battles between nationalist and revisionist. The silencing of the guns made it easier to acknowledge the complexity of the past.

“The age of social media does the opposite. Slogans replace intelligent appraisal. We risk descending into the arid wilderness of name calling.

“These are perilous times. Taking a step back to the spirit of conciliation that marked the end of the Troubles in the North seems impossible to imagine. But without that kind of flexibility the centenaries of the next few years threaten to drag us onto ever narrowing ground.”