Postcode system proves its worth during pandemic despite being once derided 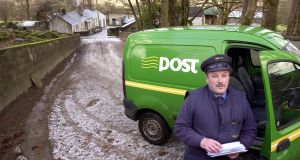 About 30 per cent, almost 680,000, of homes in Ireland don’t have a house number or name. Finding someone comes down to intimate local knowledge of a townland – something postmen and postwomen have built up over the decades. Photograph: Eric Luke

On an afternoon in March five years ago, a small team of six people packed into a cramped office room in central Dublin’s Winetavern Street assigned the final Eircode to Ireland’s 2,277,037 addresses.

It was Friday 13th. But despite the ominous date, Pat Donnelly, who had led the team over four years developing the world’s first national postcode system to identify every individual address in a country was elated.

“Because I was completely wrapped up in it for years, I thought the rest of Ireland would be just as interested. Then we launched and the country just shrugged its shoulders – it came as a big surprise,” he says.

Donnelly, who runs AutoAddress – one of three companies (including Capita and Bearing Point) in the consortium that developed the system and which did “all the technical stuff” – admits he was “thin-skinned” at the indifference.

Even worse was the stinging criticism that followed, with politicians and callers to phone-in radio shows queuing up to brand it a complete waste of €38 million in taxpayer’s money.

But five years in, the country is taking to Eircode.

Fresh figures from the Department of the Environment, Climate and Communications show 18.3 million searches for Eircodes on the online finder since the outbreak of the pandemic in March this year - a 42 per cent surge on the same period last year.

In October alone, there were 2.75 million searches on the finder – the highest monthly figure since Eircode was launched in July 2015.

While the rise in home deliveries during the coronavirus lockdowns is behind much of this year’s increased usage of the postcodes, there had been an escalating upward trend before the outbreak.

The National Ambulance Service credited it with the potential to save lives. But the main driver was Google Maps incorporating it into its system in October 2016.

“People were saying ‘finally it’s useful’,” says Donnelly. “The vast majority of usage is on Google Maps. Everything from bouncy castle hire to plumbers, people ask for an Eircode. There was a guy delivering a bouncy castle to my house in Wexford and he said to me: ‘Eircode is great . . . because it turns out my left isn’t the same as everyone else’s left when they are giving me directions’.”

Rural Ireland was quickest to embrace the system. This isn’t surprising when it was designed with them very much in mind.

The biggest factor in deciding to develop - for the first time - a unique national postcode system which identified every single address individually, rather than an area based postcode as used in other countries, was a uniquely Irish problem.

About 30 per cent (almost 680,000) of homes in Ireland don’t have a house number or name. Finding someone comes down to intimate local knowledge of a townland – something postmen and postwomen have built up over the decades.

The next nearest EU country to have a problem locating such addresses is Portugal. There, just 2 per cent of homes have no number or name.

“Overseas companies looking for Irish addresses don’t understand that for many in rural areas their address is their name and their townland. That’s it,” says Donnelly.

“If there are two Paddy Reillys, a father and son, living beside each other, the postman just determines that a guitar is probably for the younger one, and the letter from the pension company probably for the older. Then they can swap if it is wrong.”

Another issue was postcode bias. The team behind Eircode didn’t want it used to determine areas which can lead to unfairness in the issuance of flood insurance cover, say, or the allocation of schools.

Building the code was a laborious slog. “There is an awful lot of hidden design to make sure problems haven’t arisen,” says Donnelly. “And you get no thanks for problems that haven’t arisen.”

Once the seven character formula was decided – the first three a “routing key” to define an area so An Post and others can sort mail, the final four a “unique identifier” pinpointing exactly an address’s location – there were a number of pitfalls to sidestep.

Each code had to be memorable for an addressee. To avoid any confusion, the number of available letters and numbers had to be whittled down, so a capital B, for example, wasn’t mixed up with the number 8.

M might sound like N over the phone, so one was dropped, the N. The team was left with 10 numbers and 15 letters to play with to identify all of Ireland’s addresses.

Then there was the danger of inappropriate combinations being thrown up.

“We took out Scrabble, an urban dictionary as well as three and four letter abbreviation dictionaries to make sure no code might cause offence,” Donnelly recalls.

“At one stage someone in the office shouted: have we restricted M1LF yet? I decided then we need to build an office app – we can’t have an office where people are shouting things like that at each other. After that, anyone who thought of any inappropriate phrases just added them into the app.”

Once whittled down, Eircodes were “effectively pulled from a barrel, starting from the top which were most memorable” and assigned to each address in An Post’s GeoDirectory database.

These were then checked again to make sure no two neighbouring codes were similar. Each four character unique identifier code has at least two differences to any other address within 300 metres.

Donnelly says an analysis of his own company’s clients – AutoAddress provides address-finding technology to much of the country’s insurance, telecommunications, finance, eCommerce and food delivery companies as well as Government – took him by surprise some months ago.

Last year, when asked to give an address or an Eircode on online forms or online shopping carts, 25 per cent of customers went with the code.

This year, the figure has risen to just over 50 per cent – for the first time, more than half of people online are choosing an Eircode over their traditional address, according to the internal study.

Other countries such Bulgaria and Malaysia are looking at copying the Irish model.

“It has reached a tipping point,” says Donnelly.

“At the start, people were piling on, saying it was a complete waste of money, no-one is ever going to use it, it needs to be redesigned. Now there is an army of people who are saying it has made a big difference to their lives.”