Are you a student nurse? We would like to hear your views on pay and allowances

Do you believe you should be paid for the work you are doing? 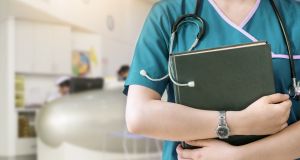 Student nurses and midwives who are doing the work of staff nurses but not being paid has become a political controversy. Photograph: iStock.

The issue of pay and allowances for student nurses and midwives has been the subject of discussion in recent weeks.

Minister for Health Stephen Donnelly has started a short-term review, expected to be completed by the end of December, of the allowances paid to student nurses in first to third year, and any increase in allowance will be paid from January.

First-, second- and third-year nurses are not paid and are eligible only for a weekly €50 accommodation allowance.

A longer-term review is under way into payment of fourth year students who work in their final year and are paid for 36 weeks between €21,000 and €22,000.

Are you a student nurse? Have your say

On Thursday, Tánaiste Leo Varadkar said that where student nurses were acting up, they should be paid, after it emerged some were being asked to do “inappropriate tasks”.

But he hit out at the Opposition over a Dáil motion calling for student nurses and midwives to be paid, which the Government rejected. Mr Varadkar said it was “party politics, it was non-binding, it was unfunded. If it had passed it would not have been worth a single euro to a single student nurses. Opposition TDs claim to have received hundreds of emails that students from first year onwards have had to work in wards.

The Irish Times would like to hear from student nurses on the issue. Have you had to work on wards during the Covid-19 pandemic? Have you had to do “inappropriate tasks”? What has your experience been? Have you been doing the work of a staff nurse? Do you believe you should be paid for the work you are doing?

Please let us know in the response box below or by email, newsdesk@irishtimes.com.

If you are reading this on The Irish Times app, go here to make your contribution.