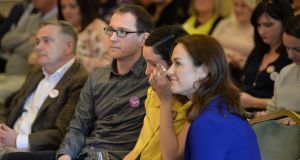 Women who choose to have an abortion when they are informed their baby will not survive outside the womb are abandoned by the State, the master of the National Maternity Hospital, Holles Street, has said.

Speaking at the launch of Labour’s campaign to repeal the Eighth Amendment, Dr Rhona O’Mahony said the State’s current abortion regime was hypocritical towards women who travelled abroad for a termination when they learned of a fatal foetal abnormality.

She said that women who chose to continue with their pregnancies in such circumstances were supported by the State and offered bereavement counselling among other things.

However, Dr Mahony said that a woman who decided she could not continue with the pregnancy was forced to make her own appointment without the assistance of a doctor, pay for their treatment and travel to a different country with “shame and stigma” to access care the State refused to provide.

“Not only that, they travel knowing that this option would be a criminal offence in their own country,” she said.

Ms O’Mahony said retaining the Eighth Amendment would send a message to families in this situation that they should not be allowed to access healthcare in their own country. Being treated in a different country carries its own risks including inappropriate referral and clinical details being missed, she added.

The campaign launch was addressed by a young couple from Marino in Dublin, who travelled to the UK last year after being informed their baby had a condition called anencephaly and would not survive outside the womb.

Amy Callahan said she and her partner, Conor Upton, both wanted the pregnancy and were distraught on learning of the news. Their devastation was compounded by the fact they could not access the healthcare they wanted at home, she said.

The couple said they brought their baby, Nico, back to Dublin after the procedure but had to take his remains on the plane as part of their luggage.

Mr Upton said they took the decision to come forward after opening their curtains last month to see a No campaign poster with a foetus and the words “A licence to kill” written on it. He said the experience was still raw for them and the posters brought the anguish back.

“This is not about us. We are talking about compassion in a crisis. The crisis here is that women are not taken care of here,” Ms Callahan said.

The launch was also addressed by the Together For Yes co-ordinators Orla O’Connor and Ailbhe Smyth and party leader Brendan Howlin.

Mr Howlin urged Labour members to canvass every household and ensure the Eighth Amendment was removed from the Constitution. The matter was not settled, he said, and the party must continue to make its case in constituencies across the State.

Mr Howlin said that women who required terminatons were now faced with lawyers and gardaí rather than the medical assistance they needed.