RNLI lifeboat responds after alarm is raised just before 9.30pm on Thursday 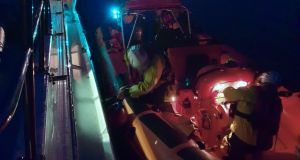 An RNLI lifeboat attended an incident in which a cruiser ran aground. Photograph: RNLI

Eight people were rescued on Lough Derg on Thusday night after a cruiser ran aground.

The alarm was raised just before 9.30pm when the 45ft vessel ran aground by Ryan’s Point, inside the Mountaineer Buoy at Barrack Bay.

The RNLI lifeboat launched 10 minutes later and arrived just before 10pm. All eight people were safe and unharmed and wearing their lifejackets.

An RNLI volunteer boarded the cruiser. Once he was satisfied that the vessel was not holed, he set up for a tow, and the lifeboat attempted to take the cruiserl astern back off the rocky shelf.

However, efforts to move the cruiser were unsuccessful. The passengers were transferred to the lifeboat and brought to Garrykennedy Harbour for the night just after 11pm.

Valentia Coast Guard arranged for the vessel to be attended to first thing on Friday morning.