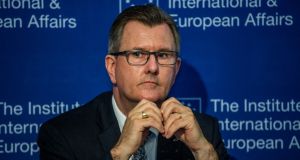 DUP MP Jeffrey Donaldson: Told the summer school regarding the Belfast Agreement that ‘we can’t enhance the relationship and the principle of consent’. File photograph: The Irish Times

Leading DUP MP Jeffrey Donaldson has said he believes strongly that the United Kingdom will not leave the European Union without achieving a deal.

Mr Donaldson also said he did not see Brexit getting in the way, or frustrating, the Belfast Agreement. While saying it could have an effect on relations between two communities in the North, he added it did not mean “we can’t enhance the relationship and the principle of consent” in the agreement. Mr Donaldson was speaking in a debate on the future shape of Northern Ireland at the Kennedy Summer School in New Ross, Co Wexford.

SDLP leader Colm Eastwood, who also participated, said he also believed a deal would be achieved and the DUP would be “kicking itself” for not accepting the backstop, as the deal would more than likely entail a border in the Irish Sea.

At an earlier session during the three-day long event, Minister for Social Protection Regina Doherty was asked if people would lose jobs in every county of the State and if thousands more will need supports and benefit in a no-deal scenario. The Minister replied that there would be impacts from Brexit but also argued it was inconceivable for any Minister to be “shocked” given the detailed briefings the Cabinet has received.

“We have done nothing but talk about it for the last three years,” she told the Kennedy Summer School in Dublin, responding to reports in The Irish Times that Ministers were taken aback at the ramifications of a hard Brexit.

Mr Donaldson also suggested that a future solution for the Republic would be to join the Commonwealth.

“The Commonwealth is no longer an exclusively British institution. It has many republics. the largest republic in the World, India, is a member. The Commonwealth offers new opportunities to deepen the relations of these two nations. Is there a place for Ireland in the Commonwealth and what does it mean? Could it be a good thing?” he asked.

Mr Donaldson told the audience at St Michael’s Theatre in New Ross that Brexit had “upped the tempo” of a debate on future relations. He said with the institutions suspended the absence of the North-South Ministerial Council was critical.

“If we had that working, I don’t think we would be in the situation we are now in,” he said. He added that unionists did not feel threatened by conversations about the future shape of Northern Ireland because the principle of consent was now accepted in the Irish Constitution. In the session, moderated by RTÉ presenter Audrey Carville, Mr Eastwood said it was a nice idea to imagine that Brexit would not affect that conversation but that was not the case. He said the Belfast Agreement was the start point to put in place a structure for people to come together but that had not happened.

Senator Michael McDowell said that in his view the idea of absorbing the North into a new Republic was the most difficult proposition and was the least likely to succeed. He said, from his perspective, the most obvious solution was confederation, where both entities would retain their existence while pooling sovereignty. He also pointed to the demographics where the Catholic population in the North was now moving into a majority position.

Mr Eastwood said the impasse over the Irish Language Act and the continuing suspensions showed the limits of current thinking, where people were focusing on red lines rather than working institutions. “It can’t be a zero sum game. The DUP have made a mistake on that and so have Sinn Féin. We are in a situation where nobody can win.”