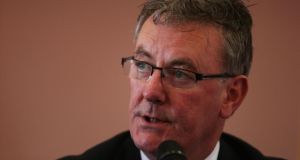 The DUP and Ulster Unionist Party have supported calls for Kincora Boys’ Home in east Belfast to be included in the investigation of how the British government handled claims of child sex abuse.

Ulster Unionist Party leader Mike Nesbitt and DUP MLA Robin Newton yesterday issued their demands after a victim of abuse at Kincora in the early 1970s waived his right to anonymity to also urge that the home be included in the British government inquiry.

Amnesty in Northern Ireland, Sinn Féin and Alliance have already called for the inquiry – triggered by allegations of an establishment “cover-up” of a paedophile ring at Westminster – to be extended to include Kincora.

Amnesty referred to claims that have “persisted, that paedophilia at Kincora was linked to British intelligence services, with claims that visitors to the home included members of the military, politicians and civil servants, and that police investigations into abuse at Kincora were blocked by the Ministry of Defence and MI5”.

UUP leader Mr Nesbitt said: “The point about Kincora is that abuse was carried out, not as part of a systemic policy, but as a horrible, murky attempt to use children to gain control over prominent public figures.”

DUP East Belfast MLA Mr Newton said: “Given Kincora’s horrible history and surrounding allegations, only the prime minister can ensure its shadowy past is brought into the light and the perpetrators held accountable.”

Sinn Féin Deputy First Minister Martin McGuinness said the “British state is clearly incapable of investigating itself” and that the inquiry needs to be “international, independent and have the powers to subpoena witnesses and access documents”.

Kincora is one of a number of children’s homes being investigated as part of the Historical Institutional Abuse Inquiry in the North.

But Amnesty said the HIA inquiry did not have the power to “compel the release of files from either Whitehall or the secret services, and given the nature of the allegations over Kincora, this is exactly where any secrets are likely to lie”.

In 1981 three senior members of staff, including William McGrath, were jailed for abusing 11 boys at the east Belfast home. McGrath was a founder member of the religiously fundamentalist loyalist paramilitary organisation Tara, prominent in the 1970s and part of the 1980s. He was the subject of intense media speculation in the 1980s that at Kincora he operated a paedophile ring for establishment figures.

Clint Massey told the BBC yesterday that he had been abused by McGrath. He said Kincora must be included in the inquiry. “I strongly believe there’s a lot more to come out,” he said. “The authorities knew what was going on.”

Lady Butler-Sloss has stepped down as the head of the British inquiry saying she was “not the right person” for the job. Some MPs and victims criticised her appointment because her late brother, Sir Michael Havers, was attorney general in the 1980s. A new chair is expected to be appointed in the coming days.