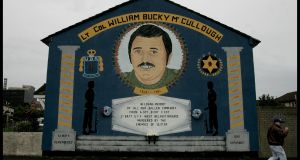 There could be ‘a lot of emotion in loyalist communities and the potential for civil disorder’. Photograph: David Sleator

A Brexit deal which is seen to threaten the union between Great Britain and Northern Ireland could lead to civil disorder by loyalists, the head of the Police Service of Northern Ireland has warned.

Simon Byrne said that, depending on what happened with Brexit over the coming weeks, there was a potential among loyalist communities to “bring violence back on the streets”.

There have been repeated warnings that any return of a hard border with the Republic following Brexit could lead to terrorist attacks by dissident republicans.

But Mr Byrne said they had to be prepared that loyalists could react if they felt their position in the United Kingdom was under threat.

His warning follows fierce criticism of Boris Johnson’s Brexit deal by the DUP who have claimed it will leave Northern Ireland as a “semi-detached” part of the UK.

“It’s well rehearsed that any hard border between Northern Ireland and the Republic will be seen as a return to state institutions by the nationalist community and it will raise the threat of attack towards infrastructure,” Mr Byrne told BBC2’s Newsnight.

“Our concern is also the loyalist community has at times shown it can mobilise quickly, bring large numbers of people on to the streets and engage in public disorder in support of their cause.”

Depending on what happens with Brexit, Mr Byrne said there could be “a lot of emotion in loyalist communities and the potential for civil disorder”.

“There are a small number of people in both the loyalist and nationalist communities that are motivated by their own ideology and that have the potential to bring violence back on to the streets,” he said.

“We need to make sure that we’re in a position to thwart that sort of behaviour with the support of the communities and all parts of Northern Ireland.” – PA