Councillors to vote to decide if sought advance of €38,500 will be issued to BID DL 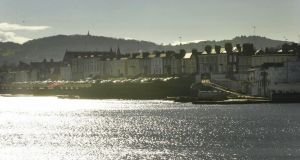 Dún Laoghaire Business Improvement District is seeking an advance of €38,500 from the local council to make up the cash flow shortfall. Above: Dún Laoghaire sea front. Photograph: Dara Mac Dónaill

The company set up to revitalise Dún Laoghaire has run into cash flow problems with a significant number of traders refusing to pay improvement levies.

Dún Laoghaire Business Improvement District (BID DL) is now seeking an advance of €38,500 from the local council to make up the shortfall.

Dún Laoghaire-Rathdown county councillors will vote on Monday on whether to make an immediate payment to the company.

Under the proposal, a maximum of two advance payments of €38,500 could be made a year as long as the company makes “every effort to ensure a sustainable cash flow position” and continues to meet the council’s finance department “until they are in a position to sustain their programme”.

BID DL promotes commerce in the town and has organised recreational events and festivals, arranged free wifi, set up a promotional website and published a five-year strategic plan.

But two years after it was set up it remains divisive. In February 2014, local businesses voted 55 per cent in favour of setting the annual levy (calculated at 3 per cent of current commercial rate – about €200 on average). But by the end of that year, just 45 per cent of liable ratepayers had paid.

BID DL received a jump in payments after that, and figures supplied to Councillor Micheal Merrigan (Ind) showed about 70 per cent had paid.

But this figure is disputed by Peter Kerrigan of the Dún Laoghaire Ratepayers Association, who estimated about 50 per cent of businesses have refused to pay the levy.

He said BID DL does not adequately represent businesses and if it did that it would focus more on getting parking restrictions in the town relaxed.

“The thing that has done the biggest damage to this town is the parking,” Mr Kerrigan said, adding an addiction centre also concerned traders.

Publican Thomas Dunphy, who received a Stubbs letter, said he would pay the levy if the BID company made tangible improvements to the town: “I think it’s sad at the end of the day to see this thing set up and nothing accomplished.”

BID DL said it represents more than 800 ratepayers in the area and “since its establishment in 2014, has established a Property Forum, which has already resulted in over 80 new businesses opening in the town and new businesses continuing to open every week”.

Discussions concerning BID’s resources and cash flow have taken place between senior council officials and the company in the past few months. The company’s budget for the year 2015/2016 is set at €298,000 of which €223,000 is financed from bid levies. To date, €178,959 has been collected.