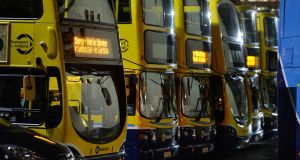 The National Transport Authority says the phased approach is to ensure ‘a manageable level of change for customers and bus operators’. Photograph: Alan Betson

The redesign of Dublin’s bus network will be implemented over a “phased basis” rather than rolled out in one stage, the National Transport Authority (NTA) has confirmed.

The network redesign under the controversial BusConnects plan is now due to be implemented between 2021 and 2023, instead of the end of 2019, as was originally stated.

The NTA said the phased approach was to ensure “a manageable level of change for customers and bus operators”.

“It is important that all bus users have an easy transition to the new bus services, know how it will operate and to allow for all customer information and engagement to take place in advance of each phase,” an NTA spokeswoman said.

BusConnects aims to overhaul the current bus system in the Dublin region by creating 230km of dedicated bus lanes and 200km of cycle tracks along with a redesign of the network.

Government’s Climate Action plan, published on Monday, said the implementation of the revised network would now happen “in phases” and between 2021 and 2023. The NTA said the revised timeline is due to the “large number of submissions received”. – Sarah Burns