Transport authority to talk to 1,300 property owners about plans for bus and cycle lanes 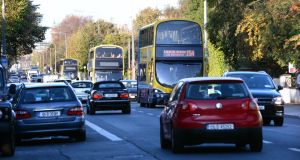 Property owners who may lose part of their front gardens to make way for new bus and cycle lanes will be notified of this by the National Transport Authority (NTA) from next month.

The NTA will begin liaising with about 1,300 home and commercial property owners who may be affected by the BusConnects project from mid-November. It is considering informing owners in phases, and is expected to offer one-to-one meetings with those affected.

The BusConnects project involves upgrading 16 core bus routes and cycle lanes into the city. The NTA has acknowledged that in order to achieve the required space it will be necessary to acquire “parts of front gardens and land in front of commercial properties”.

“We will purchase the portion of front gardens from property owners; ensure new landscaping and replanting of the gardens as well as providing compensation for the garden portion loss and disruption,” the plan states.

Where trees are removed, a “comprehensive replanting programme” is promised and where there is a loss of on-street or private parking, the NTA will seek to provide “where feasible” alternative parking close by for residents and businesses.

A public consultation process will run from mid-November until the middle of 2019 in relation to upgrading the bus and cycle lanes. Construction of new lanes would not begin until 2021, and pending approval from An Bord Pleanála.

Separately, some 30,000 submissions were received by the NTA in relation to the redesign of the bus network when public consultation closed at the end of last month. A revised network is due to be published by mid 2019 and a further round of public consultation will begin. The new network is expected to be rolled out by early 2020.

The NTA said the network redesign can be implemented using the current road network with “some upgrades to infrastructure at key interchange locations”.

“These can be done in advance of the rest of the bus lanes and cycle lanes being built,” a spokeswoman said.

The NTA has also issued a tender for a supplier to prepare an Environmental Impact Assessment Report (EIAR) including transport impact assessment and the construction strategy for the 16 core bus corridors in the coming weeks.

The tender states the concept design for the 16 core bus corridors has been completed.

“The next stage of BusConnects Dublin involves developing the concept design of preliminary design and bringing the project through the statutory approval process,” it states.

“As such, the authority will seek to appoint one supplier to prepare an Environmental Impact Assessment Report (EIAR) including transport impact assessment and the construction strategy for all 16 core bus corridors in the coming weeks.”