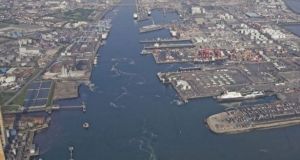 Dublin Port’s plans to become a major cultural hub has begun with the release of five plays performed there.

The works include plays about the strikes by dockers and railwaymen during the War of Independence and the work of Irish female munitions workers during the first World War.

Plans are afoot to convert the old Pumphouse in the docklands into a heritage centre capable of staging productions.

The five plays were performed and filmed there during the summer and it is hoped the Pumphouse, where they were performed, will be used as a heritage zone to host exhibitions, events and performances.

This will be followed by the refurbishment of the adjacent 1880s Graving Dock number one.

Dublin Port heritage director, Lar Joye, said the responses to the premieres over the last number of weeks have been “fantastic”.

Pumphouse Presents is a continuation of Dublin Port Company’s plans to integrate the port with the city under the port’s plans up to 2040. It is a part of a wider plan to make the docks more accessible to the public.

It is hoped that post-coronavirus, the Pumphouse will feature prominently as a new heritage zone for exhibitions, museums and performances that are realised over the coming years.

The latest play to be released online is Canaries, created by Anu Productions, and written and directed by Louise Lowe.

It is about the National Munitions Factory at Dublin Port which employed hundreds of women during the first World War.

They faced daily peril by handling explosive chemicals that carried the risk of them contracting potentially fatal diseases, amputation and even death. The effects of their work were immediately visible; a lurid shade of yellow that stained their skin and hair, earning them the nickname Canaries.

Embargo by Deirdre Kinahan, presented by Fishamble, is about three people caught up in the strikes staged during the War of Independence.

Three other plays have also been released online. Charlie’s A Clepto is about a kleptomaniac and is a one-act play written and performed by Clare Monnelly and two plays by Lee Coffey, Leper and Chip, and Slice the Thief.

All five plays will be available to view on the Axis Ballymun website from Saturday.