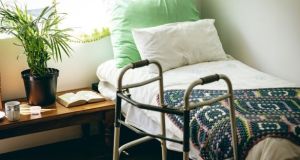 The HSE-run nursing home located in Dublin’s Phoenix Park was one of the worst hit during the first wave of the virus, with 24 confirmed coronavirus-related deaths. Photograph: iStock

St Mary’s nursing home experienced “significant” staff shortages during the first wave of coronavirus, and there was a “disconnect” in communications with relatives of residents, the Health Service Executive (HSE) has said.

The HSE-run nursing home located in Dublin’s Phoenix Park was one of the worst hit during the first wave of the virus, with 24 confirmed coronavirus-related deaths. The facility has 150 nursing home beds, and a separate 48-bed step-down hospital.

Jane Carrigan, niece of one of the residents, Rose Hegarty, who died with the virus in April, made a formal complaint to the HSE over the nursing home’s handling of the outbreak.

The HSE’s report into the complaint said “there was a staff shortage in the aftermath of the first case being confirmed” in St Mary’s in late March.

The nursing home experienced “significant staff absenteeism during Covid-19”, meaning staffing and skill mix “were not at the maximum level”. The home “maintained staffing levels to deliver the optimum level of care” through the use of agency workers.

The report said the nursing home had been in touch with infectious disease teams for clinical advice on an “ongoing basis” since mid-March.

On April 1st, consultant geriatrician Dr Frances McCarthy made a formal request for additional supports to help cope with the outbreak in the facility.

“The geriatrician outlined that assistance/advice was required with regards to swabbing/ results delays, low stocks of PPE, staffing challenges and lack of microbiology support,” the HSE report said.

The consultant sought advice on the possibility of testing all residents on April 12th, as the number of confirmed cases continued to increase, it said. At this point transmission of the virus within the care home was considered widespread, with confirmed cases across most wards.

The report acknowledged “that resident’s families experienced difficulties contacting St Mary’s” during the outbreak, which it said was due to an increased volume of calls seeking updates.

The HSE apologised for the “disconnect” in communications, particularly between a routine phone call in the morning, which was later followed by a clinical update advising the family Ms Hegarty was near death.

“We apologise for the disconnect, particularly at a time when your family was seeking hope and reassurance,” it said.

In her complaint Ms Carrigan said despite the family requesting jewellery her aunt had been wearing to be returned to the family, this did not occur.

“It was a cause of huge upset when we realised our aunt’s jewellery was missing when her belongings were returned to us on May 15th,” Ms Carrigan wrote.

“St Mary’s Hospital would firstly like to unequivocally apologise for the error that led to the loss of the treasured jewellery belonging to your late aunt Rose,” the report said. The loss of the “irreplaceable” jewellery was attributed to “human error”, it said.

Separately, an external company is currently conducting an investigation into claims by a whistleblower over how the nursing home handled the outbreak.

A HSE spokeswoman said as of December 18th there were no current confirmed cases of the virus in St Mary’s Hospital.

The previous outbreak in the facility during the first wave of the virus was declared closed on July 7th , she said.

The HSE north Dublin community healthcare organisation “offer our deepest sympathies to the family and friends of all of those who died in St Mary’s Hospital this year”, she said.