Dublin and Stormont arrive at united front to tackle Covid-19

‘The coronavirus has no political consideration. It is neither British nor Irish, unionist or nationalist’ 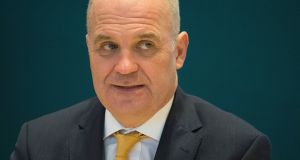 Inside the grey and modern building that houses the North-South Ministerial Council on Upper English Street in Armagh, political leaders from both sides of the Border faced each other from opposite sides of a long polished table.

It had been a long and tense week. Taoiseach Leo Varadkar sat across from First Minister Arlene Foster, Tánaiste Simon Coveney faced Sinn Féin’s Michelle O’Neill, and the Minister for Health Simon Harris sat opposite his counterpart Robin Swann.

The chief medical officer Dr Tony Holohan and his Northern Irish counterpart, Michael McBride, sat at the end. For most people present it was the relationship of these two that stood out.

Speaking as old friends, the two, who are talking to each other five times daily, led by example at the end of a week that had seen tempers frayed between Dublin and Stormont.

Nevertheless, Armagh brought both sides back on terms. Despite differences about the timing of restrictive measures, the objective was the same: to stop the spread of Covid-19.

The Government shared details of emergency legislation passed by the Dáil on Thursday, seeking Foster and O’Neill’s opinions. Coveney talked about his approach to travel restrictions.

Harris talked about the HSE’s extensive recruitment drive. Both sides agreed that a joint public communications strategy would be useful.

Meanwhile, the political infighting which had marred relations between Deputy First Minister O’Neill and Foster appeared to have been dropped.

Privately many in the Department of Foreign Affairs are grateful that the Stormont Assembly and Executive were brought to life just in time given the lightening quick spread of the virus, and London’s reaction to it.

In the Department of the Taoiseach a team led by secretary general Martin Fraser, along with former Fine Gael senator Jim D’Arcy, is working to broaden lines of communication.

Speaking on Thursday, Dr Lourda Geoghegan, senior medical Adviser with the Department of Health in Northern Ireland, said: “There is a lot of contact, a lot of close working, and I expect that will continue and potentially increase over coming weeks and months.”

Nevertheless, Northern Ireland has lagged behind the Republic, especially on the decision to close schools, even if the medical advice received by both administrations differed.

For many, especially in Border areas, it appeared increasingly illogical that schools and pubs in Blacklion, Co Cavan, might be closed, but open a mile away in Belcoo, Co Fermanagh.

Parents voted with their feet, and took their children out of school; schools used exceptional closure days to buy time until a decision was made.

Politically, the response split along orange and green lines; Sinn Féin and the SDLP backed the closure calls;, while the DUP and Ulster Unionist Party argued the time was not yet right.

When the announcement came on Wednesday evening that the North’s schools would close from Monday next, the choreography was important. It was made jointly by Foster and O’Neill. They stood side by side, each at an official podium marked with the logo of the Northern Ireland Executive.

“The coronavirus has no political consideration,” Foster said. “It is neither British nor Irish, unionist or nationalist.” Responding to it, she said, “politics must be set aside”.

Until then many in Northern Ireland had looked southwards, especially in the wake of Varadkar’s TV address. One woman from a unionist background told The Irish Times, “we’re looking for leadership, and it felt like he was our leader”.

Rarely favourable to Southern politicians, even Loyalist blogger Jamie Bryson wrote on social media that “everyone, including many loyalists”, were “praising Varadkar’s speech”.

On Thursday, People Before Profit MLA Gerry Carroll told the Stormont health committee that policy in the North had been “too aligned with [the British prime minister] Boris Johnson”.

Now, as one SDLP source put it, “we have moved into a new space”.

The future in the difficult days that lie ahead will show if that united front will hold.