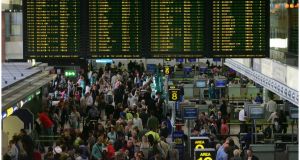 The DAA Dublin airport group has made an application to Fingal County Council for a five-year extension to its planning permission for the construction of the new north runway at Dublin Airport.

The 10-year permission for the €320 million runway project was granted in August 2007 but due to the economic downturn the construction of the runway was deferred, a DAA spokesman said.

“With the Irish economy in recovery and passenger numbers at Dublin Airport at record levels, last year DAA took the decision to begin work on the development,” he said.

The DAA has requested the extension to ensure it has sufficient time to complete the project before the planning permission deadline expires in August of this year.

Both 2015 and 2016 set new records for Dublin Airport. Traffic grew by a total of 6.2 million passengers, or 29 per cent, over the two-year period.

The latest news on passenger numbers last week prompted Mary Rose Burke, chief executive of Dublin Chamber of Commerce, a business lobby group, to call on Minister for Transport Shane Ross to speed up development of the proposed €2.4 billion Metro North rail line from the city centre to the airport.

She pointed out that the airport’s reaction to faster-than-expected growth had been to prioritise the construction of a new runway. Construction of the Metro North is expected to begin in 2021 and is scheduled to be in operation by 2026/27.

Mr Ross said before Christmas that he wanted to ensure the development of a new runway by 2020. He also said he wanted to accelerate plans for the delivery of a new terminal.

Speaking in the Seanad in November, Mr Ross said he had decided to bring forward a review of capacity at Irish State airports given the large growth in passenger numbers.

The review will consider the development of three State airports to 2050 and will also include an examination of the options for a new terminal at Dublin Airport, Mr Ross said.