Drug taken at Cork party much more dangerous if snorted 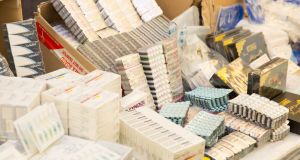 The dangerously ill teenager had snorted the drug, which allows the substance to enter the bloodstream and reach the brain very rapidly through nasal membranes

A new, potentially lethal drug is particularly dangerous if snorted rather than ingested, health experts warned yesterday. The synthetic substance was taken by a group of young people in Cork and has left one of the teenagers in a critical condition,

Both gardaí and the Health Service Executive believed that the drug taken by the six, aged from 18 to 37, at a house party in Green Street in Cork on Monday night was a psychoactive drug known as 2CB.

However, tests revealed that the substance was not 2CB but a derivative of it called 2CI – a potent psychoactive chemical first synthesized in 2003 by an American pharmacologist Alexander Schulgin.

The Garda National Drugs Unit had come across 2CI once before in Ireland in tablet form, but they had never encountered it in powder form which was how it was taken by the six young people in Cork.

All six were rushed by ambulance to Cork University Hospital and five were later discharged, but an 18-year-old from Millstreet in north Cork remains in a critical but stable condition at the hospital’s intensive care unit.

All of them had suffered serious hallucinations, but they subsequently recovered following treatment at the hospital’s emergency department.

Gardaí interviewed the five people discharged from the hospital – four men and one woman – and all five told gardaí that they had taken a substance called 2CB which prompted the HSE to issue a warning about the drug.

Gardaí arrested a 29-year-old man suspected of supplying the drug and they also seized a small quantity of the powdered substance at the man’s rented house in Cork. A sample was sent to the Garda forensic science laboratory in Dublin for analysis.

Meanwhile, the HSE warned that the 2C family of psychoactive drugs including 2CP, 2CB, 2CI and its derivative 25I-NBOMe – which are known by a variety street names including N Bomb, Smiles and Solaris – are all highly dangerous.

Pointing out that these drugs are not subject to any quality control, the HSE said that they can be sold in liquid, powder and tablet form and are consumed at parties or clubs for their stimulant, mood altering and in some cases, aphrodisiac effect.

“Young people are advised that there is no quality control on these drugs. There are problems with purity and contaminants, and there is no way of checking that what is purchased or consumed is the intended substance,” said the HSE.

“Given the serious side effects experienced by the young people in Cork, the HSE Addiction services are issuing a warning about possible contaminated ‘party pills’ and advise people not to consume any unknown substances that they are offered at this time.”

In 2003, the European Council issued a binding order compelling all European Union states to ban the drug within three months and Ireland later introduced legislation listing it as a controlled and prohibited substance.