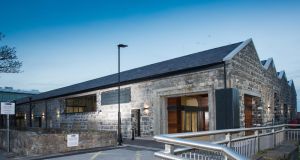 The O’Donoghue Centre for Theatre, Drama and Performance at NUI Galway which was the public’s choice for best new Irish building in the Royal Institute of the Architects of Ireland architecture awards. Photograph: NUIG

A university drama centre has been selected as Ireland’s favourite new building.

The O’Donoghue Centre for Theatre, Drama and Performance at NUI Galway was the public’s choice for best new Irish building in the Royal Institute of the Architects of Ireland (RIAI) Irish Architecture Awards.

The centre is housed in what started out in the 1850s as a bleach and flax mill.

It has been used in the past as a bonded warehouse, a munitions factory and in 1935 it became Irish Metal Industries.

Its most recent use by the university was as engineering laboratories prior to the construction of the new engineering building.

The new centre was designed by Taylor Architects with Richard Murphy Architects. It was built by local contractor Purcell Construction.

It is a 120-seat theatre space with retractable tiered seating. It comprises studio spaces, a classroom, and a workshop and rehearsal room.

The centre was funded with philanthropic support from Galway businessman Dr Donagh O’Donoghue, who was a former chairman of the Druid Theatre Company.

NUI Galway’s vice-president for capital projects Keith Warnock said the design of the building was crucial to its success.

“The incorporation of the latest technology in the theatre space and elsewhere contrasts attractively with the solid stone walls which remind us of the building’s origins,” he said.

“The award adds to the growing appreciation of the physical infrastructure at NUI Galway and reaffirms our confidence in the programme of campus development we have undertaken over the last decade.”

There are 18 categories in the RIAI awards. The full list of winners will be announced at a ceremony in Dublin’s Mansion House next Friday evening.