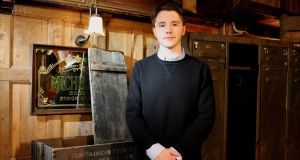 Mark O’Meara got €30,000 from Gavin Duffy, Barry O’Sullivan and Eleanor McEvoy and the moral support of all five dragons for an idea he hopes will help homeless people get food, clothes and a bed.

It is hard enough to convince entrepreneurs in the Dragons’ Den to invest in profitable ideas, so when design student Mark O’Meara (22) entered their lair with an idea that will never make money, he was pretty sure he’d be sent packing.

Instead, he got €30,000 from Gavin Duffy, Barry O’Sullivan and Eleanor McEvoy and the moral support of all five dragons for an idea he hopes will help homeless people get food, clothes and a bed.

On the final episode of the current series of Dragons’ Den, on RTÉ last night, the NCAD student wowed the entrepreneurs with his embryonic not-for-profit organisation Kara Ireland, which aims to make a secure cashless currency available to homeless people.

In essence, the system will allow people to buy vouchers in various denominations in certain shops and give them to homeless people, who can exchange them for food, clothes and shelter in participating outlets.

“We all know that homelessness and addiction – either to drugs or to alcohol – go hand-in-hand,” he told The Irish Times.

“And we all know that a lot of people have a reluctance to give cash directly to homeless people, because they don’t want to feed that addiction. So I wanted to find an alternative way people could give directly to the homeless.”

Earlier this year Mr O’Meara was looking for a final year design project.

“I thought if I could develop some kind of voucher system for homeless people it would lend itself to a project. So it started out as a concept.”

He realised it could be more than an idea, but knew that “for this to become a real thing I need people who know business, who know how to take something from an idea to an actual thing”.

So he submitted an entry to the TV programme. “I did not think I would get on the show because it is a not-for-profit idea . . . so to see this happening is very surreal,” he said.

“He was very impressive in the pitching process,” said Mr Duffy. “There is still an awful lot of work to be done. There is a serious piece of business engineering needed and we have to work closely with the homeless charities”, but he is confident “everything will be in place by the end of the summer”.

Mr O’Meara has no plans to make money from it. “I have an empty bank account and it will be empty for the foreseeable future, but I am not taking any money from this.

“I am tired of hearing about chief executives with not-for-profit organisations making big money. That is not for me.”