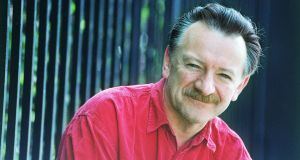 The festival, now in its 37th year, kicks off on Thursday and runs until Sunday night.

Atlantic Arc Orchestra is a seven member ensemble which, according to William Hammond of the Cork Folk Festival, “creates a powerful fusion that pushes the tradition to the edge of its boundaries in an organic collaboration of Irish, Scottish and English musical ancestry”.

“The line-up features musicians and singers from Ireland, North and South and Scotland and they draw on the shared musical heritage of the Atlantic arc region and we’re very excited to premier this new group as part of the Cork Folk Festival with a concert at the Cork School of Music on Friday,” he said.

Among the other highlights of this year’s festival is a concert at the Cork Opera House by Cork singer songwriter Mick Flannery.

The line-up also includes Compánach, featuring, among others, Fintan Vallely on flute, Tiernán O Duinnchin on Uilleann pipes and Gerry O’Connor on fiddle and is a collaboration of photography and live music.

The festival takes places across several venues in the city. Also performing are The Unthanks from Northumbria, Buttons and Bows and Irish folk du Tír na nÓg formed by Sonny Condell and Leo O’Kelly will perorm, as will British singer-song writer and We Banjo 3 from Galway and west Cork resident Roy Harper.

For full details on this year’s festival, visit corkfolkfestival.com.