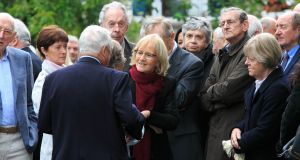 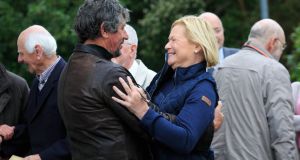 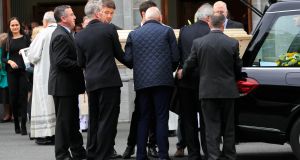 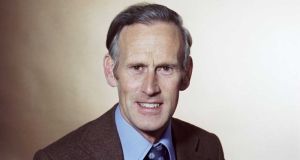 His son John said his father, who died this week aged 87, was a devout Catholic who was “kind, constant, generous, beautiful, eccentric, enigmatic, infuriating, deep and unknowable”.

To laughter, he recalled his father pushing his car a short distance from their home at 5am as he left for RTÉ so as not to wake the neighbours, and to save the battery.

Mr Cockburn was a cyclist described on Twitter as the man who probably invented the cycle to work scheme. He was also green and recycling long before it came into vogue, including holding onto a Supervalu bag, with a hole in it, for about 15 years, his funeral heard. He sometimes cycled standing up to save the seat of his “good trousers” and his gardening was chaotic and based on the “Eden principle – let God do most of the work”, his son said.

His father’s ability to speak Russian, combined with “extraordinary” travels during the 1940s and the discovery of a stash of Russian magazines in his home, led his grandchildren to speculate he was a Russian spy, John said. However, he lacked the “threatening physique” of a James Bond and his suits were “more Tolka Row than Savile Row”.

His father loved his family and grandchildren, often writing poems for them, he said. He believed in the power of poetry, and radio rather than television was his “pure love”.

He never sought to be a public personality or to be regarded as a “living saint” but, long before “fake news”, he had worked out news was inseparable from the credibility of the newscaster, John said.

John was delivering the eulogy at his father’s funeral Mass at the Church of St Therese, Mount Merrion, Dublin. The chief celebrant was Fr Tony Coote and the four co-celebrants included Fr Dermot McCarthy representing RTÉ.

The late newscaster’s daughter Evelyn read to the congregation a verse of Alfred Lord Tennyson’s poem Crossing The Bar, handwritten by her father.

And after that the dark

And may there be no sadness of farewell

For though from out our bourne of time and place

The flood may bear me far

I hope to see my pilot face to face

When I have crossed the bar.”

Mr Cockburn was born in 1930 and joined RTÉ as a part-time newsreader in 1958 and was made a full-time employee in 1972. He went on to anchor the main evening news for more than 30 years before retiring in late 1992.

He married Marie Scully about whom he was “crazy” and in turn he drove her crazy, his son said. She died some years ago and a photograph of the couple in their younger days was placed on the simple wooden coffin, alongside his prayer book.

Mr Cockburn was a man with the “most mischievous” smile which he flashed at viewers when saying goodbye in his last newscast, the priest said. Don filled his retirement with “endless things”, walked and cycled everywhere, read prayers of the faithful in church many times, did guided meditation weekly and had many friends within the Mount Merrion community, he added.

After the funeral Mass, Mr Cockburn was buried at Deansgrange cemetery.