NUJ ‘will not accept either threats or lectures’ from Saoradh 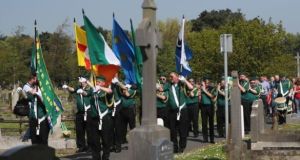 Flags are flown during the Saoradh Easter commemoration at Milltown Cemetery in Belfast in April. Photograph: Niall Carson/PA Wire

Dissident republican group Saoradh has been condemned for attempting to “intimidate” journalists covering raids by the Police Service of Northern Ireland (PSNI) on properties linked to members of the group on Thursday.

Detectives from the PSNI’s Major Investigation Team, working on the murder of Derry journalist Lyra McKee carried out early morning searches at properties in the city, seizing items but not making any arrests.

The National Union of Journalists called a statement from Saoradh following the raids “menacing and arrogant” and a “clear attempt to intimidate journalists”.

Saoradh claimed yesterday that “activists homes were targeted by British Crown Forces who colluded with an overzealous media to intensify the hype”. The group claimed that a film crew “in civilian clothing and body armour with Press markings” travelled in an armoured PSNI land rover.

“Saoradh now ask were these individuals members of the ‘Press’? If so, which organisation were they working for?”

“This behaviour… calls into question the supposed impartiality and objectivity of the media, it may in future, given the environment, endanger members of the press who do go about their profession in an impartial and objective manner.” The group called on the National Union of Journalist (NUJ) to “investigate the incident and expel any of their members found to have engaged in this mornings attack.”

Twenty-nine year old journalist Ms McKee was murdered while covering rioting in the Creggan estate in Derry in April when PSNI members were shot at. Dissident republican group the New IRA admitted to the murder, offering “full and sincere apologies” for her killing. Last week four people were arrested in Derry by police investigating the murder.

In a joint statement, NUJ general secretary Michelle Stanistreet and assistant general secretary Seamus Dooley said that the tone of the Saoradh statement is “menacing and arrogant”. “This is a clear attempt to intimidate journalists covering the investigation into Lyra’s murder. The NUJ has confidence in the ability of our members to cover this story in a professional manner.”

“The concern expressed for human rights and for the safety and welfare of working journalists is hypocritical in the context of the murder of our member Lyra McKee. So too is the demand for an NUJ investigation into the presence of media representatives in the area during the raid.”

The union also criticised Saoradh distributed pictures of the media crew which covered the raid along with its statement, which it said was “clearly intended to send a message”. “Our message to Saoradh is clear and unambiguous. NUJ members will continue to do their work in a professional manner and will not accept either threats or lectures on standards from an organisation which responded in such a callous fashion to Lyra’s murder.”