Direct provision system to be addressed at Cork festival 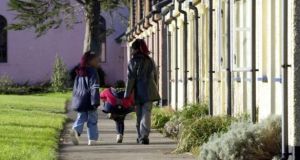 The ongoing direct provision controversy sees some 4,000 asylum seekers remaining in designated centres awaiting a decision on their status.

The treatment of asylum seekers in Ireland will be addressed by former Supreme Court judge Catherine McGuinness as part of this year’s Mother Jones Festival in Cork.

The ongoing direct provision controversy sees some 4,000 asylum seekers remaining in designated centres awaiting a decision on their status.

Ms McGuinness, who has predicted the state’s treatment of asylum seekers will be the subject of a future government apology, will address the issue in a lecture entitled “Direct Provision - Not the Solution” to be held as part of the fifth annual Mother Jones Festival at the end of July.

First held in 2012, the Mother Jones Festival celebrates and honours Mary Harris who, born in Cork in 1837, emigrated as a teenager with her family to Canada and later moved to the US where she became involved in the trade union movement where she campaigned for miners and their families.

Dubbed “the most dangerous woman in America” in 1902, she also organised a Children’s Crusade in 1903 where children marched on the White House to highlight the scandal of child labour and she became famous for her catchcry, “Pray for the dead and fight like hell for the living”.

This year’s Mother Jones Festival and Summer School runs in Cork from July 28th to August 1st and will see Siptu President, Jack O’Connor deliver the 2016 Mother Jones Lecture entitled “Organising to Win - What is to be Done”.

According to Jim Nolan of the Cork Mother Jones Committee, “the 2016 festival and summer school will again see a wide variety of talks, films and music associated with the labour movement, human rights and social justice issues as well as historical and heritage events”.

Among the other events at this year’s festival is a lecture by Anne Twomey of the Shandon Area Historical Society on the activities of sisters, Sheila and Nora Wallace who oversaw much of intelligence work in Cork during the War of Independence from their shop in St Augustine’s Street.

Among the films which will be shown will be Rosemary Feuer’s film about Mother Jones “The Most Dangerous Woman in America” and Yvette Vanson’s film about the 1984 UK Miners Strike, “The Battle for Orgreave” while Frameworks Films will show their work “Mother Jones and Her Children”.

Local music folklorists and labour song collectors, John Nyhan and Mick Treacy will give a concert entitled “Songs of the Mining Tradition” while Jimmy Crowley and the Cork Singers Club will also perform during the festival. For further information, visit motherjonescork.com.