Did ECB overstep its remit in dealings with Ireland?

Analysis: ECB had a lot of money at stake in Irish banks and felt it needed to protect this 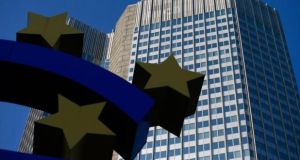 The ECB subsequently also intervened in Italy, Spain and Cyprus in different ways. Ireland was thus not particularly picked on.

Did the ECB overstep the mark in its dealings with Ireland? Or were they just acting like a normal, prudent, banker?

It is not the role of a central bank to be dictating overall economic policy to a country. But of course there is a context here, too.

By autumn 2010 some kind of bail-out of Ireland was on the cards.

If you wanted to pick a decisive moment it was when German chancellor Angela Merkel and French president Nicolas Sarkozy after meeting in Deauville in mid October declared that investors in sovereign bonds might not necessarily be protected.

After this ill-judged intervention, Irish sovereign bond yields rose sharply and there was a renewed rush of money out of Irish banks.

Pressure was placed on Ireland from EU and international governments in relation to going into a bailout, too, as former minister Eamon Ryan spoke about this morning.

This was the context of the ECB’s intervention - or interventions - which stepped up with a letter sent on October 15th, just before Deauville , which is now also published, and which culminated in the November 19th letter published by The Irish Times today.

There is a fine line where the powers of governments and central banks meet. Did the ECB step over this line in this case? Legally, it may not have been in breach of its statute, though a legal expert would need to assess this.

My own view is the extent of the direction given by the ECB is not the way a central bank should operate.

Practically there was at that time a vacuum at the heart of the governance of the euro zone - no one was fully “in charge”.

So the ECB felt it needed, along with others, to push Ireland along. In fact, the ECB subsequently also intervened in Italy, Spain and Cyprus in different ways. We were thus not particularly picked on, this was the way Europe was run during the crisis.

The ECB had a lot of money at stake in the Irish banks and felt a need to protect this. If a bank it lent money to collapsed and the ECB was not repaid that would be, it warned, effectively providing monetary financing in breach of the EU rules.

By November 2010 Ireland was heading, inevitably, to a bail out. It was just that bad. The ECB will still face flak for writing in the terms that it did to Ireland.

But it was also a key player in an issue not referred to in this letter - the full protection of senior bondholders in the banks.

This was shot down by the ECB and others. Around the time of the bailout the issue was raised again. Right through these discussions US treasury secretary Timothy Geithner was also an influential voice in saying these bondholders must be fully repaid.

There was another refusal when the new government tried again to renegotiate the approach after it came to power in March 2011.

The ECB pushing us into the bailout may have hurt our pride. But it was the preoccupation with protecting all bondholders that hurt our pockets, even if - by the time of the bail out itself - doing so would have been a boost to our finance, but not a transformation.