Defence Force Cadets of the 96th Cadet Class are training with the HSE as part of their contact tracing team in efforts to combat the coronavirus outbreak. Video: Alan Betson 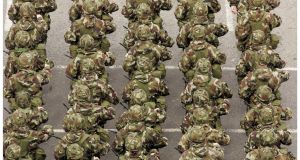 There is no plan to deploy troops to support the gardaí on the streets, although such a scenario cannot ultimately be ruled out, says Vice-Admiral Mark Mellet. Photograph: Alan Betson

The Defence Forces will move to a “status yellow” force posture on Wednesday of next week, with in the region of 330 troops available to aid the Health Service Executive (HSE) response to coronavirus.

About 800 more troops will be available on an hour’s notice under the status yellow, Vice-Admiral Mark Mellet, the Chief of Staff of the Defence Forces said on Friday.

The status yellow is one level higher than the Defence Forces’ usual “force posture”, which is denoted as blue.

Vice-Admiral Mellett said there was no truth to rumours that the Defence Forces would be going on a status red alert from Monday, and emphasised that his troops would be offering support functions to the HSE. There is no plan to put troops on the streets in their capacity as an aid to the civil power, he said.

“[Status yellow] is a resource-generating mechanism, it’s not about the issue of troops on the streets or any of that misinformation that’s out there,” he said.

A platoon of about 30 people would be constantly available to supplement the HSE at each of the nine barracks around the country, as well as at Haulbowline Naval Base and Baldonnell, the Air Corps headquarters.

A larger, company-sized force of about 100 people can be mustered at any of the bases within an hour under the status yellow, he said. He said the functions fulfilled by the Defence Forces would be as drivers, chefs, emergency medical technicians, maintenance, engineers or perhaps decontamination teams. If needed, he said his personnel could take samples from people suspected to have Covid-19.

He confirmed that the Defence Forces properties and capabilities were being audited as use for isolation facilities or other medical facilities that the HSE may need. In the first instance, he said that would focus on their properties but he said the armed forces could provide tented facilities if needs be.

Speaking to The Irish Times, he also said naval vessels could be pressed into action as testing facilities, as the navy had developed the skillset to test for illnesses in large numbers during humanitarian missions in the Mediterranean, although he emphasised that there was no current plan to do so.

“A ship would be a suitable platform for a testing facility, You can call the upper deck a Covid area and have your personnel in [personal protective equipment] doing the testing, but at the moment we’re not at that stage,” he said.

He said at the moment there is no plan to deploy troops to support the gardaí on the streets, although such a scenario could not ultimately be ruled out. “It’s a scenario that right now is not on our radar but as a contingency it is core business to us to aid the civil power.”

He said he was satisfied he had sufficient resources to manage the Defence Forces involvement in the Covid-19 crisis, despite recent concerns over the levels of personnel available to the service. “I have the manpower resource that has been allocated by government and that’s the resource I play with,” he said.

“I’ve never met a chief of defence who wouldn’t like to have more resources, but my job is to maximise the return from the defences I have, and that’s what I’m doing. I’ll manage the Defence Forces against the ask from the HSE.”

However, he said that, if necessary, he would examine pulling troops back from overseas missions, where 550 are currently serving. He also confirmed that the Defence Forces are in discussions with members who have left the force and are considering “re-entry”.

“If I have people who are fit and qualified who have recently left the Defence Forces that I can bring back in, I’m going to try and ensure that the legislative provisions are available to me that will allow that to happen,” he said.

He also confirmed some members who were planning to retire “are being asked to extend in the service” but said that number was low.

He said it was likely members of the Defence Forces would be infected with Covid-19 during their work in the weeks ahead. Four members are currently self-isolating.

“The health and welfare of our personnel is of primacy in this, and I have to be conscious that many of my personnel will get Covid. It’s a statistical reality, it is impossible to avoid that.”

He criticised the spread of misinformation about the Defence Forces’ planned reaction to the Covid-19 outbreak. “They’re not doing a public service, anyone who is providing fake news or misinterpreting facts or trying to raise fears,” he said.

“We’d ask anybody who wants to know what the Defence Forces are doing just to ask, and you’ll get the facts.” He also said he believed ongoing industrial relations issues in the force would not hamper its response. He is planning to meet with soldiers’ representative groups this week.

“I have full confidence in the loyalty, dedication and commitment of the men and women of the Defence Forces. We’ve moved into a different phase in the context of our absolute determination to meet the priorities of the HSE,” he said.