Defence Forces in battle to recruit for leadership positions 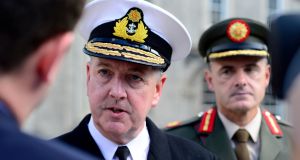 The Defence Forces are struggling to fill command positions for an imminent rotation of troops attached to the United Nations Interim Force in Lebanon (Unifil).

As of last week, military sources say that six of nine command positions, which include 2IC (or second-in-command), plus the heads of intelligence, operations and logistics, and three company commanders, were yet to be filled.

It is understood that preparations for the deployment in early May are at an advanced stage, including a pre-deployment reconnoitre, which is generally the final inspection on the ground to check that all is as it should be before troops are dispatched.

Since 2013, Irish troops have led the Unifil contingent in what is called sector west in southern Lebanon. Some 340 DF troops were deployed and the unit included a 100-strong contingent of Finnish and Estonian troops.

But last November, they withdrew and, since then, Ireland has had to deploy a further 100 soldiers to make up the numbers. It is hoped that Hungarian troops will fill this role from next November.

In the meantime, however, some 440 Irish troops are being rotated from a Defence Forces pool under retention pressure, particularly among the middle and upper officer ranks.

The chief of staff of the Defence Forces, Vice Admiral Mark Mellett, confirmed that some positions remained open but expressed confidence that they would be filled in time.

“There are gaps,” he said. “It wouldn’t be unusual to have gapping in terms of leadership for deployments overseas, [and] we have never had higher numbers overseas, certainly in recent decades.”

He said “the simple reality” was that the Defence Forces are in employment competition.

“There is a buoyant economy and the skill levels that we have make our personnel very valuable to the commercial world,” he said.

“You are always going to have a churn and a churn is healthy, but I would rather it be down about 5 per cent rather than the 8.1 per cent it is at present. It is that extra per cent that is crippling us at present.”

He was confident that all officer positions would be filled before May.

“We’re talking about a deployment in excess of 400. So we’d need to put it into perspective. I accept that they are predominately officer positions, but in a deployment of over 400, we’ll get there. It’s not ideal. I wish we were able to have a longer lead time, in terms of those appointments but we will get there.

“I don’t want any commander to feel obliged, or forced, into taking risks with regards to personnel, against taskings that he’s not able to sustain.”