Trump adviser warns of risks to US economy of strong dollar 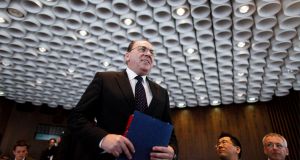 Axel Weber: The former president of German Bundesbank has predicted that the dollar will continue to rise for another 10 to 15 months. Photograph: Alex Domanski/Reuters

A senior adviser to Donald Trump warned about the risks of a stronger dollar at the World Economic Forum on Tuesday, saying it could make it more difficult for the president-elect to deliver on his promise to revitalise the US economy.

“We need to be careful about the rising currency, not just because of what is going on internationally but it will have an impact internally to the United States as well,” Anthony Scaramucci, who will become a White House adviser and public liaison to government agencies and businesses, said in Davos.

Hedge fund manager Scaramucci’s views were echoed by other bankers and investors, including David Rubenstein of the Carlyle Group, who warned of a repeat of the 1990s emerging markets crisis which forced Bill Clinton to bail out Mexico.

Mr Rubenstein estimated that there was $4.5 trillion (€4.2 trillion) in emerging market corporate debt that was dollar-denominated. If the dollar, which is already perched at 14-year highs versus the euro, continued to rise, this would squeeze countries that have borrowed in dollars, possible even forcing more bailouts.

“Right now we are in a situation where the currency has gone up so strong, the dollar, that we do run the risk of potentially another Mexican-style crisis,” Mr Rubenstein said.

“At some point if this trend continues there will have to be some intervention I think to keep the dollar from being too strong,” he added.

Axel Weber, the chairman of Swiss bank UBS and a former president of the German Bundesbank, predicted that the dollar would continue to rise for another 10-15 months.