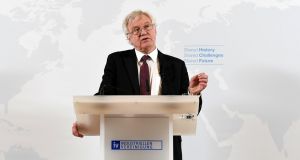 Sinn Féin’s growing influence in the Republic has pushed the Irish Government into taking a harder-than-expected stand in the Brexit negotiations , British Brexit Secretary David Davis has claimed.

The charge, though much-ridiculed, has been made by a series of Conservative politicians in recent months, such as former Northern Ireland secretary, Owen Paterson, but never by a leading member of the British Cabinet.

Speaking at a conference in London, the Brexit Secretary said that he had not anticipated the tough approach to negotiations taken by Taoiseach Leo Varadkar, who took over from Enda Kenny last June.

“We had a change of government, south of the border, and with quite a strong influence from Sinn Féin, and that had an impact in terms of the approach,” he said – though he was corrected by members in the audience, who told him that no change of government had taken place.

Told that he should “check his facts,” Mr Davis replied: “Well you had a change of leader or a change in taoiseach. They’ve [Sinn Féin]been playing a strong political role which they haven’t done historically, that I hadn’t foreseen.

“We’ll leave our interpretations aside if you like. But the simple truth is that on both sides of the border the politics changed with the change of taoiseach and with the disappearance of the Northern Ireland executive.

“That’s quite important. It’s slowed the process down slightly.”

In a statement to The London Times, the Irish government quickly rejected Mr Davis’s claims: “(The Irish) position is unchanged since the time of the 2016 UK referendum on EU membership and is one which has cross-party support in Dáil Éireann.”

Tánaiste and Minister for Foreign Affairs Simon Coveney also described the comments as “way off the mark” and “nonsense”.

Mr Coveney told RTE’s Morning Ireland that it would help if Mr Davis came to Dublin where he could learn about Irish politics and would realise that the idea of an Irish government being influenced by Sinn Féin was “nonsense”.

Meanwhile, five former Northern Ireland secretaries of state have warned about their concerns that the introduction of a hard border between NI and the Republic, saying “that it will lead to instability that could threaten the very existence of the agreement.

“The Good Friday Agreement was founded on mutually reinforcing rights and the obligations and cemented through referendums in NI and the Republic of Ireland,” wrote Peter Mandelson, John Reid, Paul Murphy, Peter Hain and Shaun Woodward.

“Those who value the agreement and the peace it brought to Northern Ireland have a duty to speak up and make clear their opposition to the (British) Government’s Brexit policy,” the five former senior politicians declared.

HSE’s contact tracing service at its busiest since peak of outbreak in mid-April 01:02
President Higgins to address UN on its 75th anniversary 01:00
Coronavirus: Halve your social contacts, public told 01:00
Dublin restaurateurs praise ‘amazing’ support from customers 01:00
‘As an international student, being away from family can be tough’ 01:00