David Norris says gay cousins should be allowed to marry 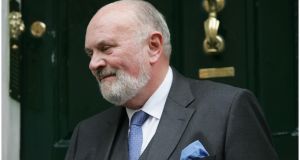 Independent Senator David Norris has said that gay cousins should be allowed to marry each other following the same-sex marriage referendum.

“It would not take a feather out of me if two cousins married each other,’’ Mr Norris said. “What is the problem with that?’’

Mr Norris said the regulations covering cousins marrying were introduced to protect the genetic pool, but that this would remain relatively untroubled by same-sex marriage.

He said that he suspected that he would be pilloried by “the grotesque Irish media’’ for making the suggestion.

He said the referendum was the culmination of a struggle lasting more than 40 years.

“When I started off, it was a world of hatred, contempt and silence,’’ he said.

“Gay people were regarded as sources of sin, crime and disease.’’

Mr Norris said there had been a wonderful transformation in attitudes towwards the issue over many years, which flowered during the marriage referendum.

“I have heard so many moving stories of young people all over Ireland who have been given the courage for the first time to face the reality of their sexuality, come out, declare themselves and live their lives,’’ Mr Norris said.

Mr Norris was speaking as he and fellow Senator Katherine Zappone were praised for their role as gay activists by Minister for Justice Frances Fitzgerald, as she introduced the Marriage Bill 2015 in the Seanad.

The Bill, which recently passed through the Dáil, gives effect to the referendum.

Mr Norris, who has been active in the campaign since the 1970s, also received cross-party praise from Senators.

The Independent Senator praised Ms Fitzgerald and former Labour leader Eamon Gilmore who, he said, had put the referendum on the agenda.

“Most particularly I want to thank the people of Ireland, because it was our co-citizens who voted this through in overwhelming numbers,’’ he said.

“The gay community simply could not have done this on their own.’’

He also referred to Ivor Browne, “a great psychologist’’, who had championed gay rights.

Mr Norris said he could not be as gracious as Ms Fitzgerald regarding the No campaign.

“I am not a bit diplomatic . . . I am not political, they were absolutely ghastly.’’

To laughter from a packed public gallery, Mr Norris, referring to the strong political support for the referendum, said he recognised that homosexuality seemed to have an extraordinary calming effect on political parties.

Independent Senator Fidelma Healy-Eames, who opposed the referendum, said a tolerance of sexual difference was vital but so was a tolerance of opinion.

Ms Healy-Eames said Taoiseach Enda Kenny had facilitated the referendum and was too willing to go along with the wishes of international political heavyweights on the issue.