Cycling is safer than many people believe it to be, says Minister 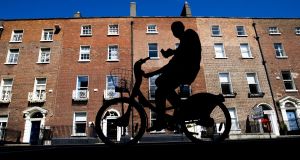 Cycling is not as dangerous a pursuit as it is perceived to be, the Minister with responsibility for road safety has suggested.

Speaking at the launch of the National Road Safety Week, Hildegarde Naughton said cycling suffers from “negative perceptions” as to its relative safety.

So far on Irish roads this year, seven cyclists have been killed. Cyclist road deaths rose by an average of 8 per cent in Ireland each year between 2010 and 2018 peaking at 14 in 2017; it was eight last year.

Ms Naughton, the Minister of State for Road Transport, said the increase in cycling deaths has to be seen in the context of a greater increase in the number of cyclists on Irish roads.

“I don’t want to minimise any deaths on the road. The fact is that cycling has become statistically safer in the past 20 years and yet the perception of many people is that it has become more dangerous,” she said.

Addressing the Road Safety Authority’s (RSA) annual academic lecture, she said it had been a “great achievement” within the State that deaths on the roads have more than halved in the 20 years between 1999 when there were 413 deaths and last year when there was a record low of 140 deaths on Irish roads.

She said the focus on the the next road strategy will be on pedestrians and cyclists as part of the European Commission’s “vision zero” strategy.

This envisages a reduction in serious death and injury on EU roads by 50 per cent by 2030 and eliminating such accidents by 2050.

The RSA annual academic lecture was given by Prof Walter McNicholas on the theme of drivers falling asleep at the wheel.

Prof McNicholas, the director of the pulmonary and sleep disorders unit at St Vincent’s Hospital, is an expert of sleepapnoea as a cause of driver fatigue.

Obstructive sleep apnoea (OSA) is a disorder that affects 5-10 per cent of the adult population and is the most prevalent sleep disorder causing daytime sleepiness.

Patients with OSA are up to 7 times more likely to have a road traffic collision than the general population as a result of sleepiness.

Such accidents tend to occur after midnight and in the mid-afternoon and tend to correspond to circadian periods of sleepiness.

They involve a single vehicle and usually occur on high-speed roads. He recommended that patients suffering from sleep apnoea should not drive until effectively treated.

“The untreated driver is a risk behind the wheel,” he said.

RSA chairperson Liz O’Donnell said drivers fighting sleep are behaving as if they were over the drink-driving limit for alcohol.

The results of a major international study conducted in 2018, called the E-Survey of Road Users’ Attitudes (ESRA), which were presented at the online lecture, showed that a quarter of drivers in Ireland (23.9 per cent ) said they had driven at least once, over the previous month, when they were so tired that they had trouble keeping their eyes open.

This is higher than the European average of 20 per cent of drivers.

A similar national study of driver attitudes and behaviour, conducted in Ireland by the RSA last year, further demonstrated that driver fatigue is a major problem on Ireland’s roads, as 16 per cent of the 1,000 motorists surveyed confirmed the more serious fact that they had ever fallen asleep or nodded off while driving.